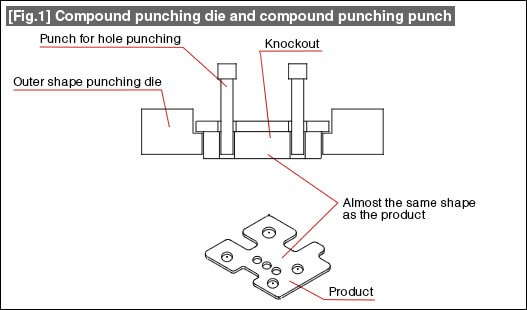 A knockout has two roles, that is, the role of a stripper of a hole punching punch and the role of ejecting the product that has entered inside the die. Normally, a knockout is prepared with the same shape as that of the product.

As shown in Fig. 1, a knockout is assembled inside the die. A compound die has the inverted placement structure in which the die for outer shape punching is the top die (goes up and down along with the slide of the press machine) and the punch for outer shape punching is the bottom die (fixed on the bolster plate side of the press machine). A knockout is a characteristic part of this structure. 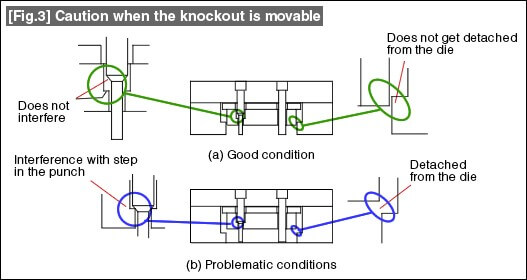 The knockout is always in contact with the blank material. The material is often coated with cutting oil, and due to this oil the material adheres closely to the knockout, and even after the product is ejected from the die it sticks to the surface of the knockout, leading to the problem of double product punching (the problem of punching the material again with a product remaining stuck on the knockout), which can break the die. This phenomenon is a kind of trouble that cannot be prevented even when the operator is being cautious. It is preferable to take countermeasures for this in the structure of the die.

As shown in Fig. 1, adhesion of the material to the knockout is prevented by providing a kicker pin in the knockout. When only one kicker pin is provided, it is positioned at the center of gravity, and when several kicker pins are provided, they are positioned considering the balance among them. 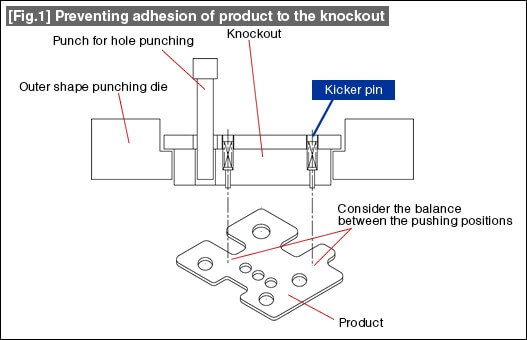 As shown in Fig. 2, the guiding is done by a surface with a stable shape (linear parts, etc.), detailed shape portions or corners are provided with escapes by providing R or C chamfering thereby reducing the parts that can cause problems. 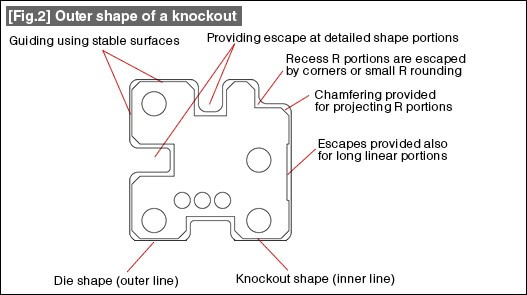 In the escapes for the rounded (R) portions, it is better that the projecting R portions are not escaped by making the rounding R shape small, but by C surfaces. The recess R portions are escaped by providing corners or small R. It is also good to provide escapes in the middle of long straight line portions.