In the case of a large product, as shown in Fig. 1, several tapped holes made inside the knockout, and the knockout is held by screwing suspension bolts (stripper bolts) into these tapped holes. If this method is used, the design of the die becomes considerably easy. Even the preparation of the die becomes easy because there is no turning upside down of the die. For the purpose of preventing breakage of the suspension bolts, it is necessary to use the thickest screws possible and to retighten the bolts frequently. 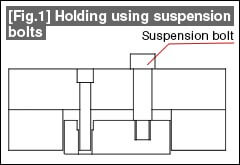 In the case of a round shape or a simple shape, a flange is provided at a part of or all around the knockout and the knockout is prevented from falling down by this flange (see Fig. 2).

Since a knockout is usually hardened, even the flange part becomes hardened. Since this makes it brittle, if the flange portion is thin, it can easily break due to repeated movements, and hence care should be taken to design the flange to be somewhat thick, and to suppress the hardening to about 56HRC.

In the method of using a flange, since the strength of the die is affected if the flange is made too big, the size should be designed considering the balance with the size of the product so that there is no excessiveness.

The precaution in this method of pushing at the center is that even the positions of the holes in the product should be balanced. A lopsided placement of holes wherein the holes are more in some parts is not good because then a force will always act to make the knockout get tilted. In such shapes, it is necessary to adopt the method shown below.
Fig. 2(a) shows the most commonly used structure for driving a knockout. Several knockout pins are provided considering the balance between the shape of the product and the placement of holes so as to push down the product in a balanced manner. Even in the method of supporting the knockout by suspension bolts, the placement of the suspension bolts is also made as per the above description. 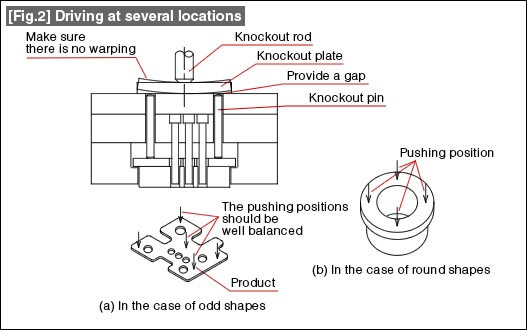 Even in this case, the knockout pin is made slightly short thereby ensuring that the knockout is not pushed too much. The knockouts will be placed in a circular fashion when forming round shapes such as washers, etc, and three or four pins are positioned as shown in Fig. 2(b).

To review part 1 of 2 of Knockout punch dies, click here.