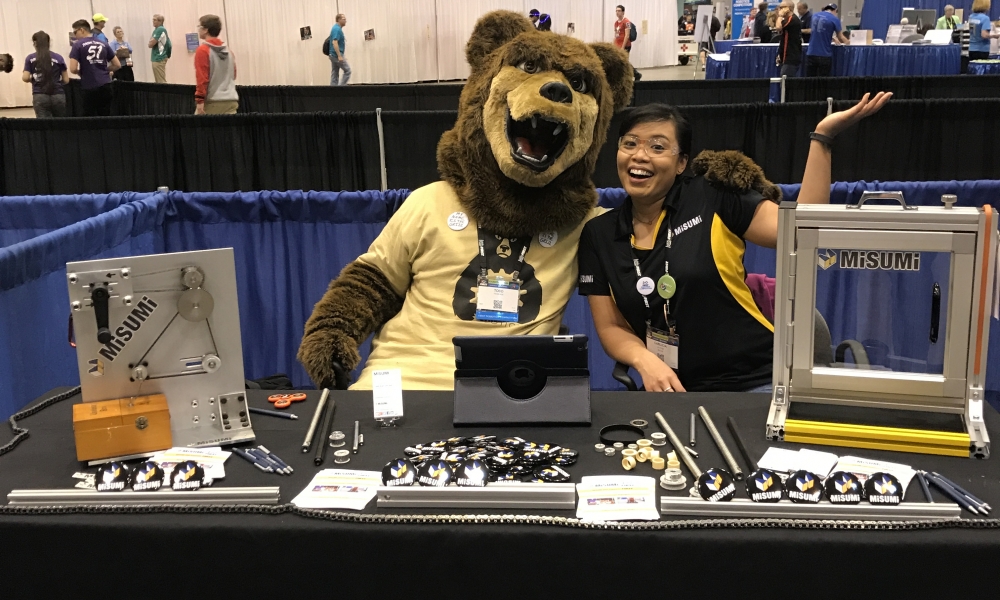 The following week Worlds took place in St. Louis, MO.  This will be the final year at the America’s Center as next year it will be held in Detroit, MI.  The FIRST®Lego® League and FIRST® Robotics competition were held at the Dome while FIRST® Lego® Junior and FIRST® Tech Challenge were held at the St. Louis Union Station.

The Robot Service Center was set up very similarly to Houston but at this location, we were very close to the Machine Shop.  The teams were very busy getting their robots and pits set up for the St. Louis Championships.  We were surrounded by many other suppliers.  Many engineers and employees of our customers were mentors and volunteers for the teams and were happy to see us there.  At our booth, we showed off a variety of product from rotary motion products to aluminum extrusion. 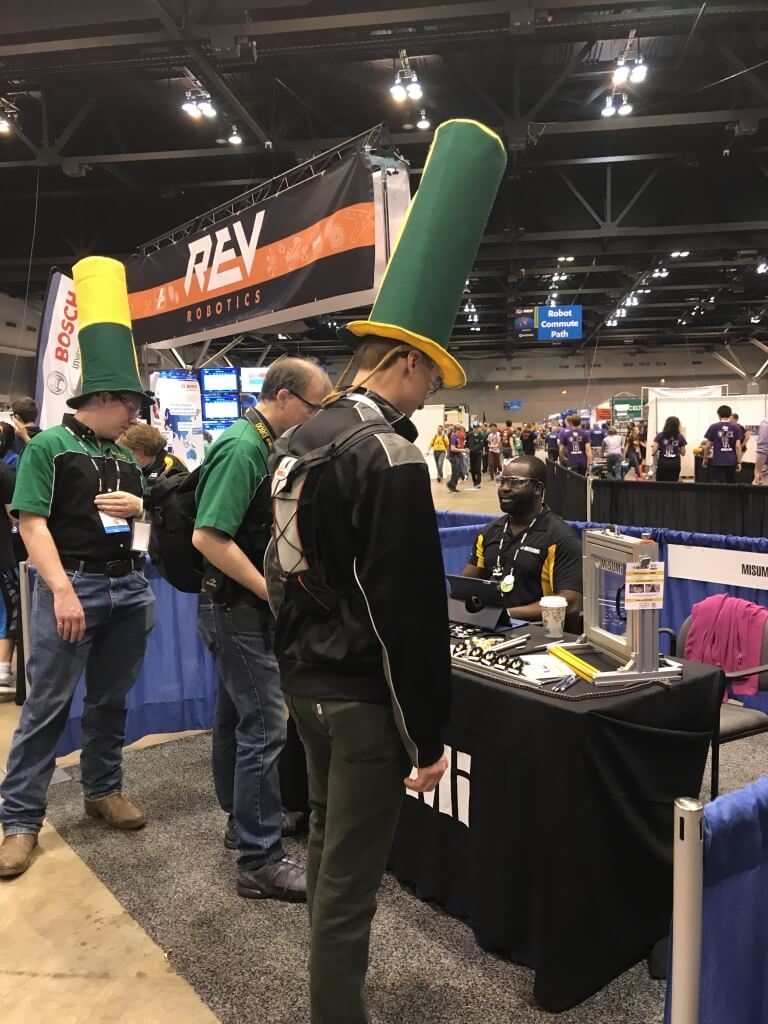 We were able to take some time and hop on the shuttle to visit Union Station.  We sponsor a Tech Challenge team, Mechanical Paradox, and decided to pay them a visit.  It was my first time meeting the team and I was eager to see their progress.  Walking into Union Station reminded me of King’s Cross Station in the Harry Potter Movies, the black iron accents, arched hallways, and cream colored brick made me feel like I was about to board the Hogwarts Express.  We approached the team’s booth and immediately spotted our banner to the left of their booth!  They were very excited to see us, such a great group of students, both intelligent and humble.  We arrived just in time to catch their first match.  Walking through the Tech Challenge pits was very similar to the Robotics pits except on a smaller scale.  The age range was broader as well, reaching grade school through high school. 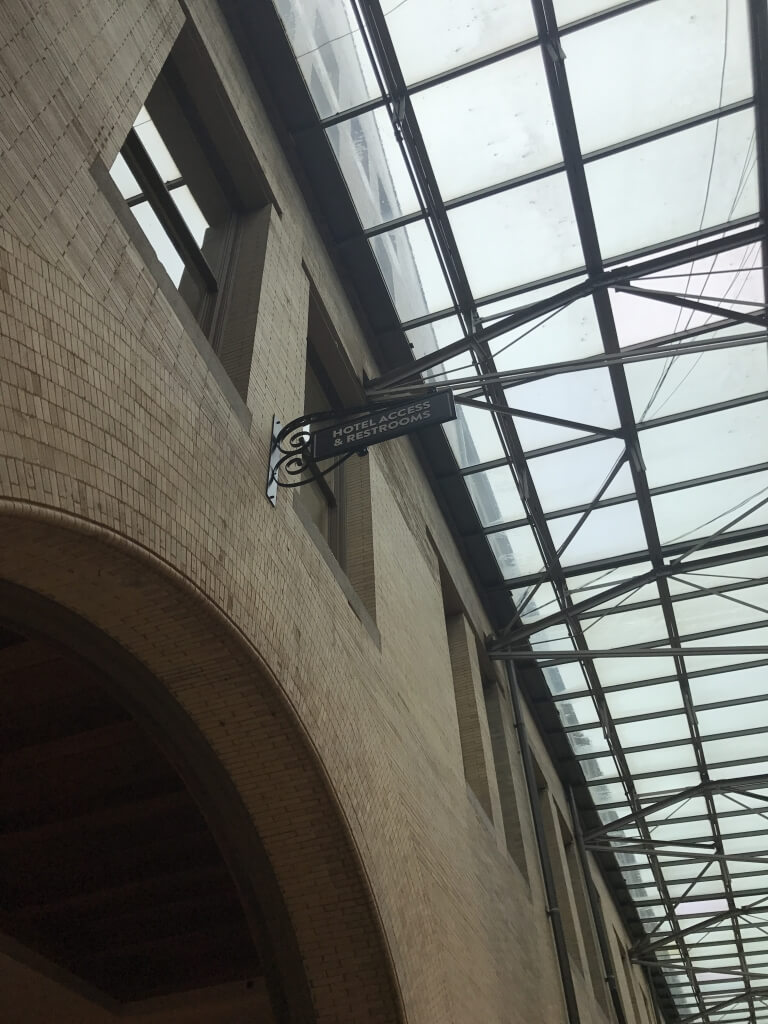 As we were walking around, one mentor/volunteer stopped us and suggested that we visit another team that used our Aluminum Extrusion on their robot.  I guess our MISUMI gear gave us away that we worked for MISUMI. 😉  Their team name was the Iron Maidens.  It was a pure treat to meet them as their reaction to meet us was both awe and gratitude.  They praised MISUMI for how easy it was to use the product and the availability of different size ranges which is something they have been looking for.   We were also just in time to catch one of their matches. 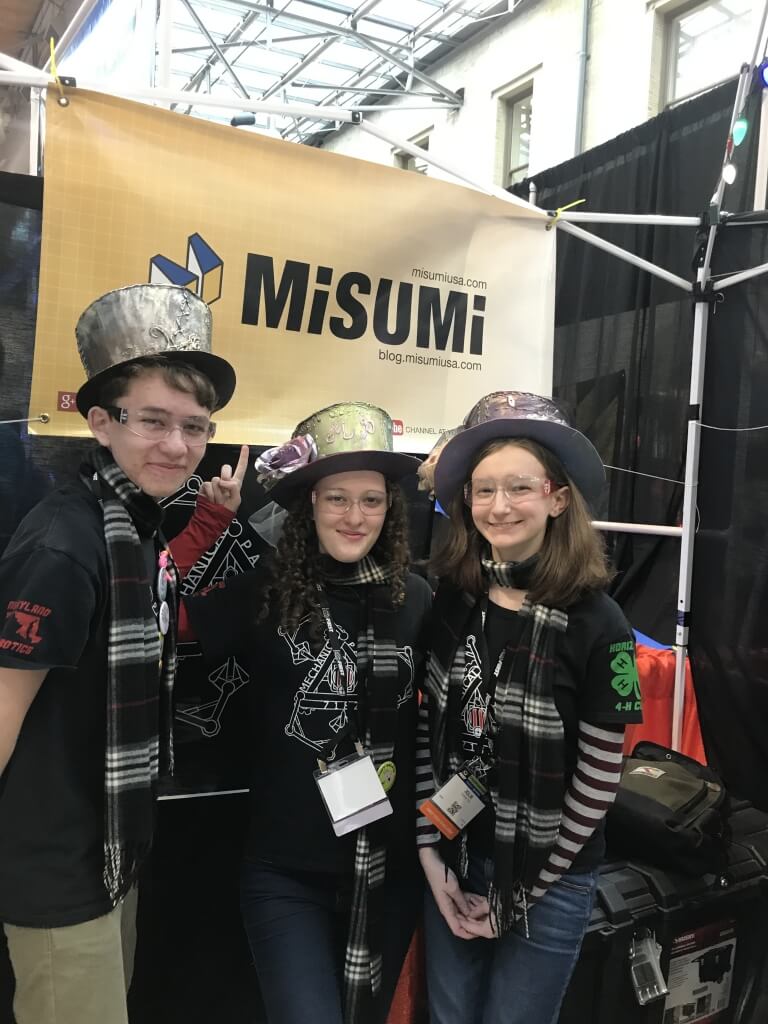 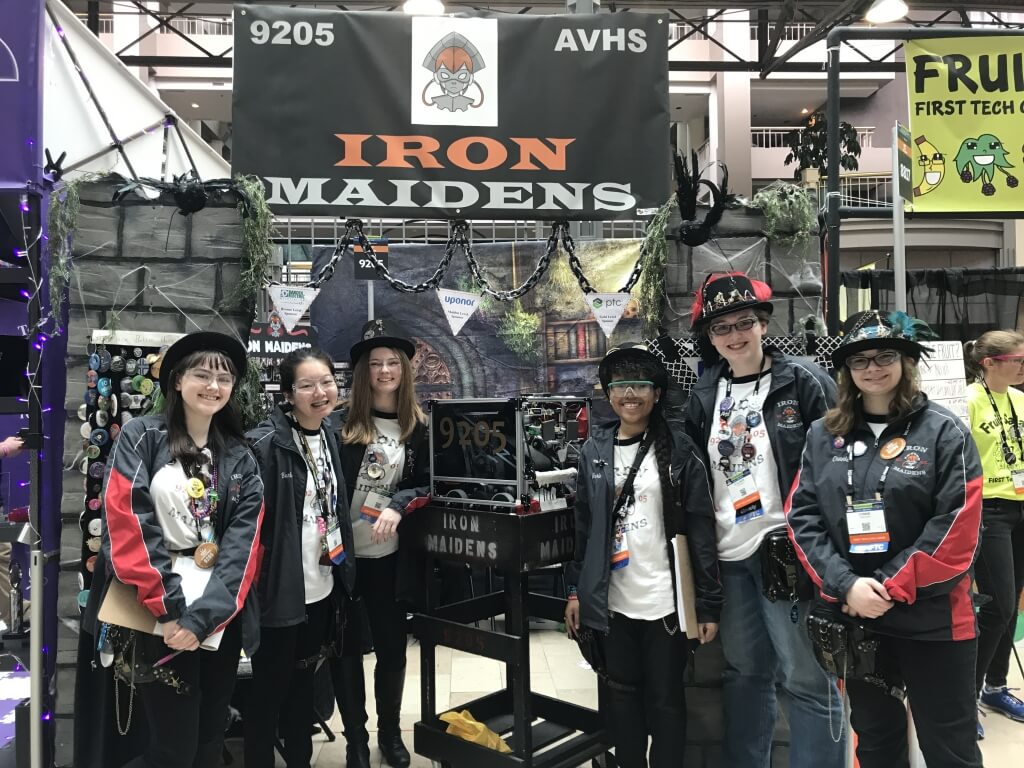 Iron Maidens and their robot

Watching the Tech Challenge matches were just as exciting as the Robotics matches.  The playing fields were much smaller and the tasks very challenging.  Time is limited as teams must light beacons, shoot balls, and lift an exercise ball.  Mechanical Paradox won their first match!  More details on the performance of Mechanical Paradox in the next post! 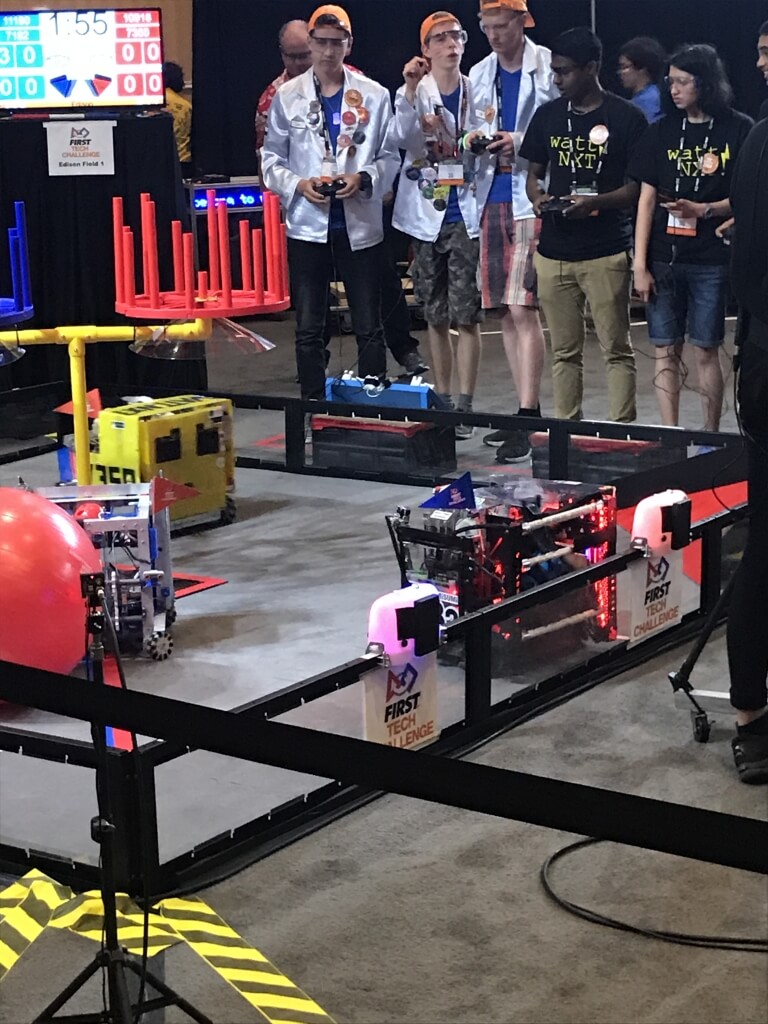 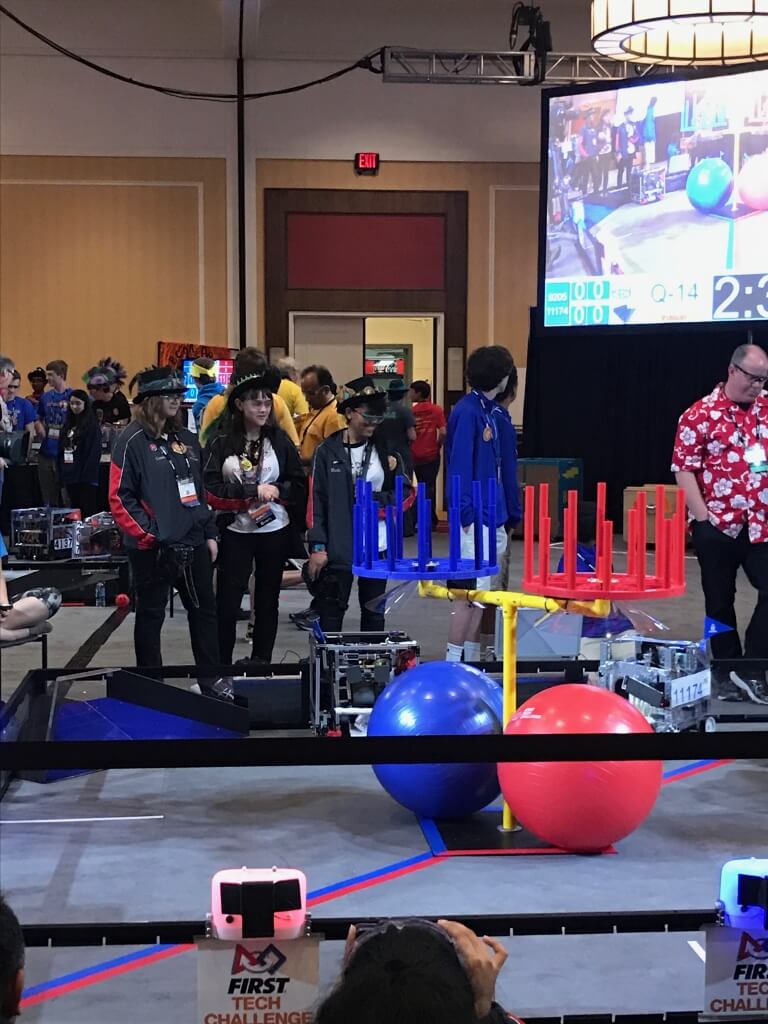 Our booth was as busy as ever meeting teams, mentors, coaches, and even mascots!  We had many teams familiar with us and equally fascinated with our configurability model.  We were able to witness firsthand the positive influence that this program has on these students.  One particular student shared with us his life-changing experience with FIRST®. He always had an interest in engineering and shared with us that he did not grow up in a stable home and had abusive parents.  When he found out his school had FIRST® Robotics, he immediately joined because he always loved working with his hands and engineering.  Not only did he learn new skills, he told us he learned to control his temper and create new friendships.  He credits all the good things that have changed him to FIRST® and his mentor.  Thank you for sharing your story with us!  You are an inspiration. 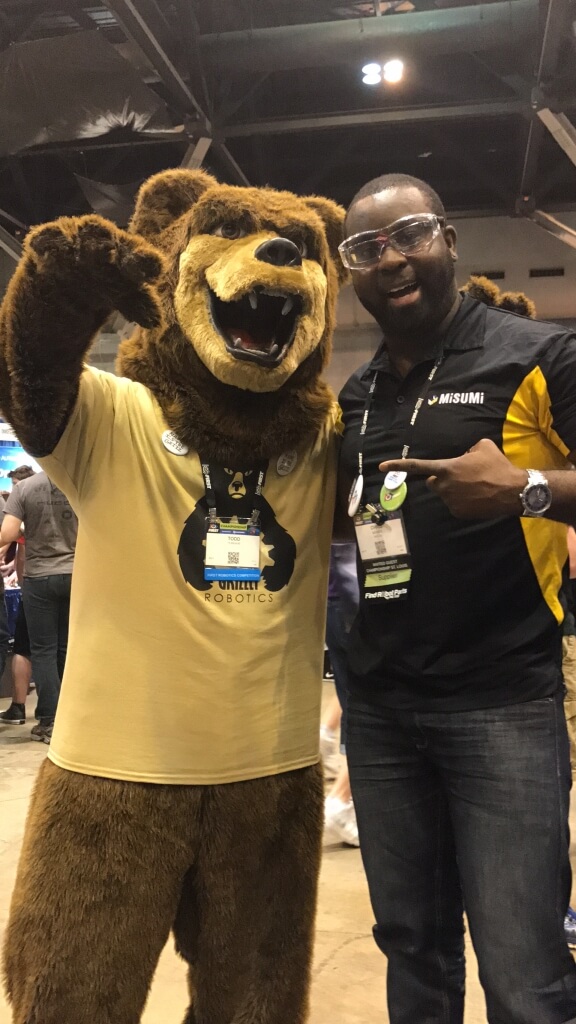 The competition fields were held in the Dome.  It was truly a sporting event with big screens, lights, announcers, stadium seating, and even TV commentators.  You could stream the championships live online.  Team spirit was high as seats were filled on many sides of the stadium.   Being in the presence of these teams and FIRST®, you can’t help but feel both inspired and energized. 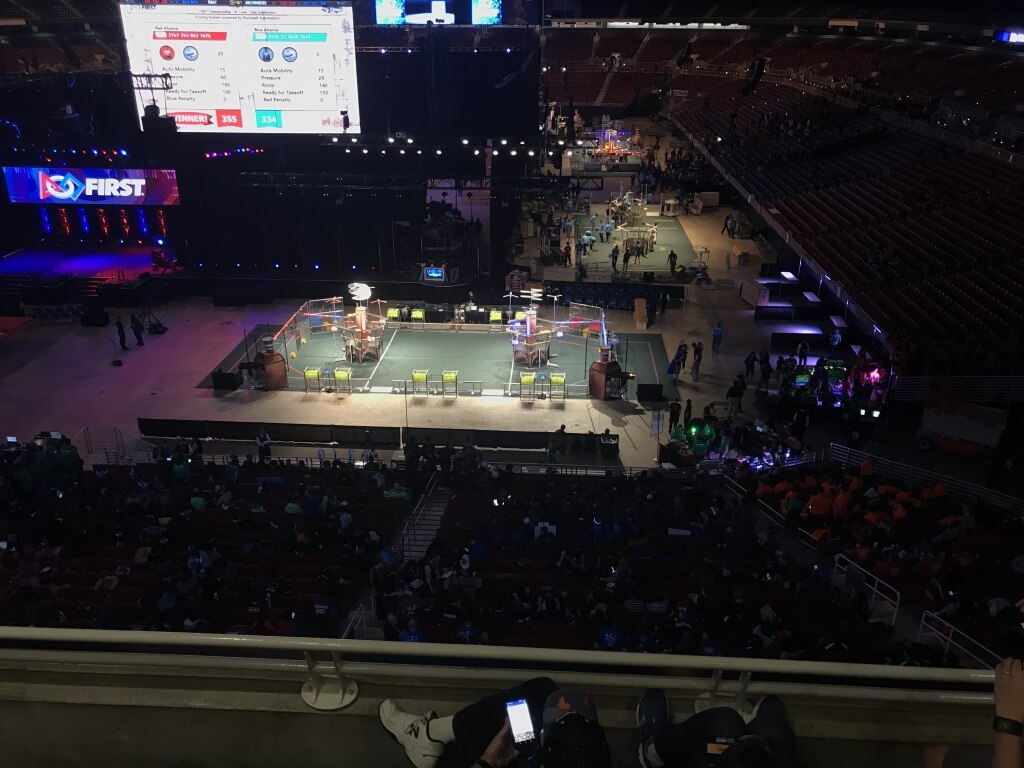 Towards the end of the championships, we attended a reception hosted by the founder, Dean Kamen, and the FIRST® organization.  Dinner was delicious and in-between courses they featured videos starring many teams that made it against all odds.  One Team was from a high-risk, low-income area and they interviewed the original members of the teams.  Many of them said that not only did FIRST® change their lives, it saved their lives.   One team made it to the championships with a robot made of mostly scrap metal.  Dean also announced new partnerships with the International Association of Chiefs of Police as well as the President of Israel.  Dean’s goals are to bring science to the forefront of young minds outside of the classroom and in a hands-on way, changing the world one robot and student at a time.

Missed out on last week’s post about Worlds at Houston? Check it out here.

Also, check out my experience as a Guest Emcee at the Midwest Regional here!

Next week, meet one of our sponsored Tech Teams, Mechanical Paradox!

For Part 3 of the Warehouse Automation series, ...