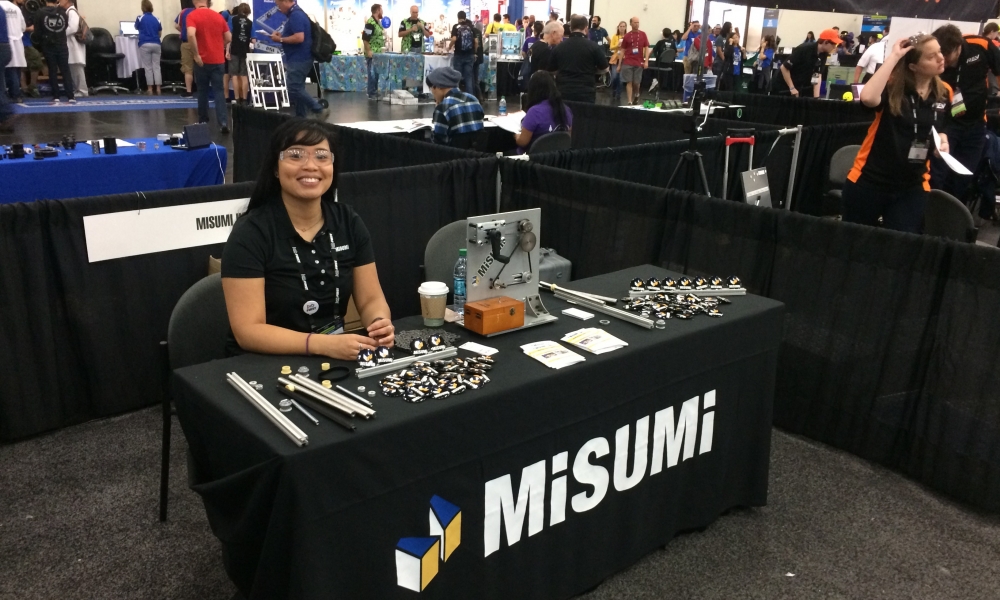 Another supplier perk is providing spare parts and technical advice in the Robot Service Center during the Championships or more commonly called by the teams, Worlds.  There are 2 locations for the championships, Houston and St. Louis.  We attended both championships and were excited to bring MISUMI‘s vast product selection to the teams.

The location of the Robot Service center was near the entrance of the FIRST® Robotics pits so teams could easily find us.  The pits are the area that each team houses their robot.  During the competition, their robot can get a bit beat up so modifications and repairs need to be made.  Teams will have various tools in their pit area, FIRST® also provides a machine shop for times of emergency as well as the service center. 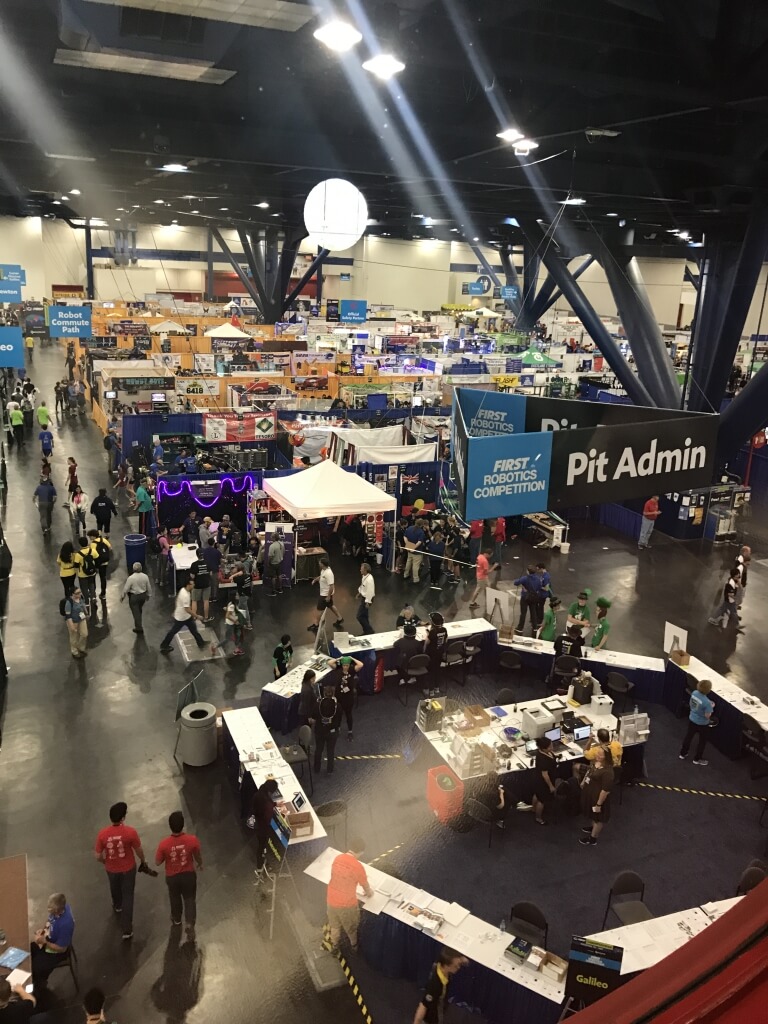 There were many companies providing support and sharing their ideas for the teams in the service center.  I found it interesting that there was one company created by 2 FIRST® Robotics Alumni that provides robot parts specifically for FIRST® Robotics teams, REV Robotics.  We were surrounded by familiar industry names like Ruland Coupling, Clippard, and Automation Direct.  It felt more like a family vibe instead of a business feel,  FIRST® brought us together for one great cause. 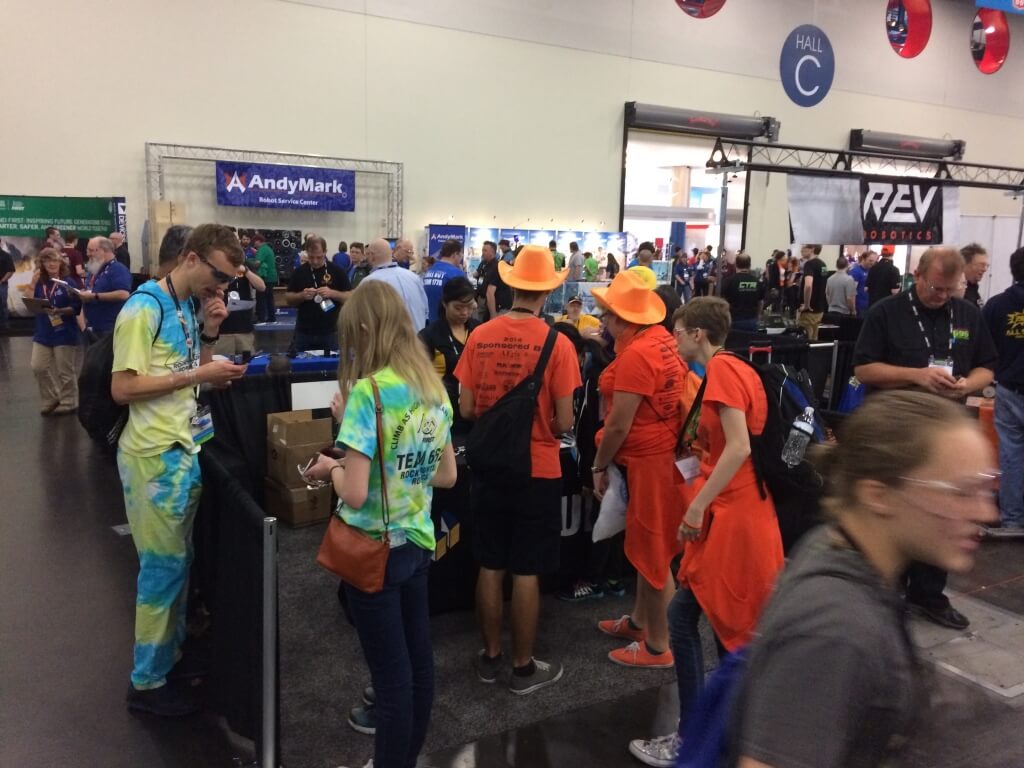 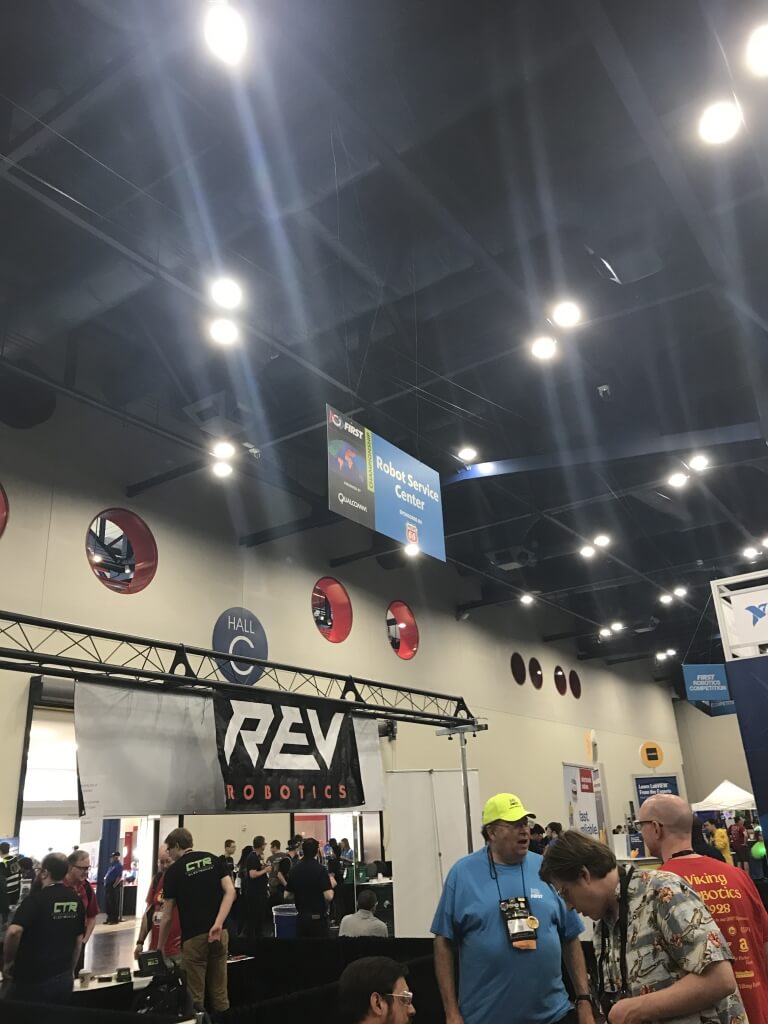 The culture of FIRST® Robotics is truly a sight to see.  Many teams had team colors, mascots, a clever name, and even themed outfits.  Some of my favorite names were: Team 118 The Robonauts, Team 3925 Circuit of Life and Team 180 S.P.A.M Robotics (Speed, Power, and Maneuverability).  Pit areas were also dressed up with lights, banners, giveaways and signs.  They do get judged as part of the competition in their pit area as well.  Safety is number 1 at FIRST® so safety glasses are a must.  A popular commodity amongst the teams besides robot parts were buttons! The students loved collecting them from other teams and showing their support by wearing them.  Of course, MISUMI was ready and had their own version of team spirit by providing MISUMI style buttons. 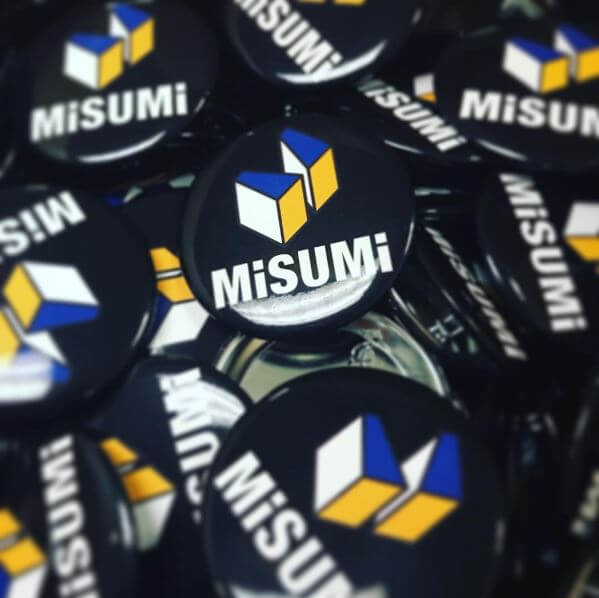 At our booth, we were received with many thanks for supporting FIRST® both by being present and by providing parts.  If teams needed a part that they did not prepare to lose during the competition, the pit administration would announce it over the sound system.  Other teams, as well as suppliers, would come to their aid with the part they needed.  This is a part of the FIRST® Coopertition® vision which “…is founded on the concept and a philosophy that teams can and should help and cooperate with each other even as they compete.”  We were able to help quite a few teams with parts including a shaft collar, chains, and plain shafts.  Teams were excited to see us there even if they’ve never heard of MISUMI, the reaction to our configurability model was priceless and they were impressed with MISUMI’s capabilities and range of products. 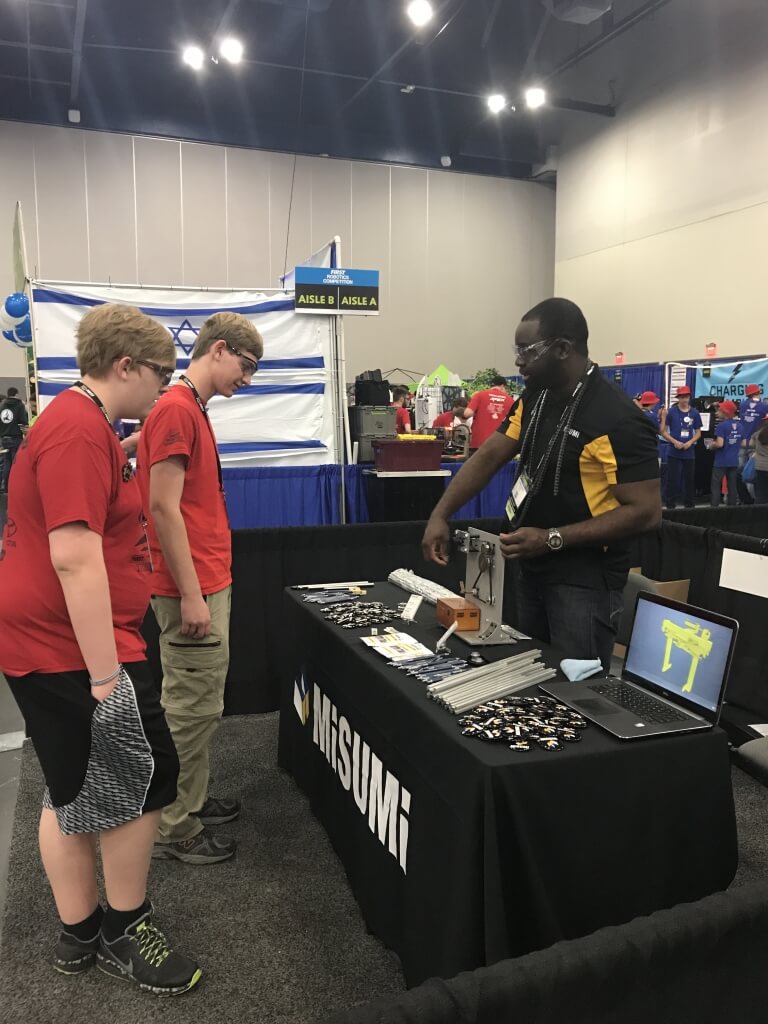 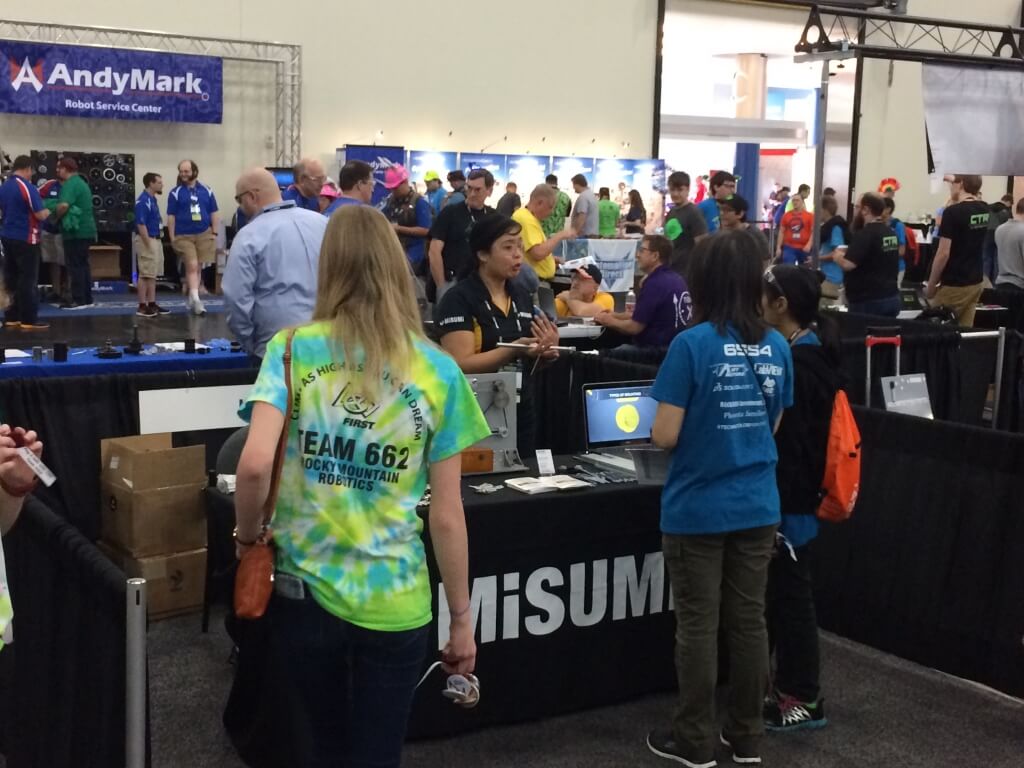 One particular moment that stood out to me at the Houston championships was Dean Kamen walking around the pit area.  Dean Kamen is the founder of FIRST® and he is a celebrity amongst the teams.   The students surrounded him in a massive moving herd attempting to get an autograph from him as he walked through the pits.  He has many accolades in the medical industry and has created many technological advances we use today.  I found it inspiring that the students idolize him. 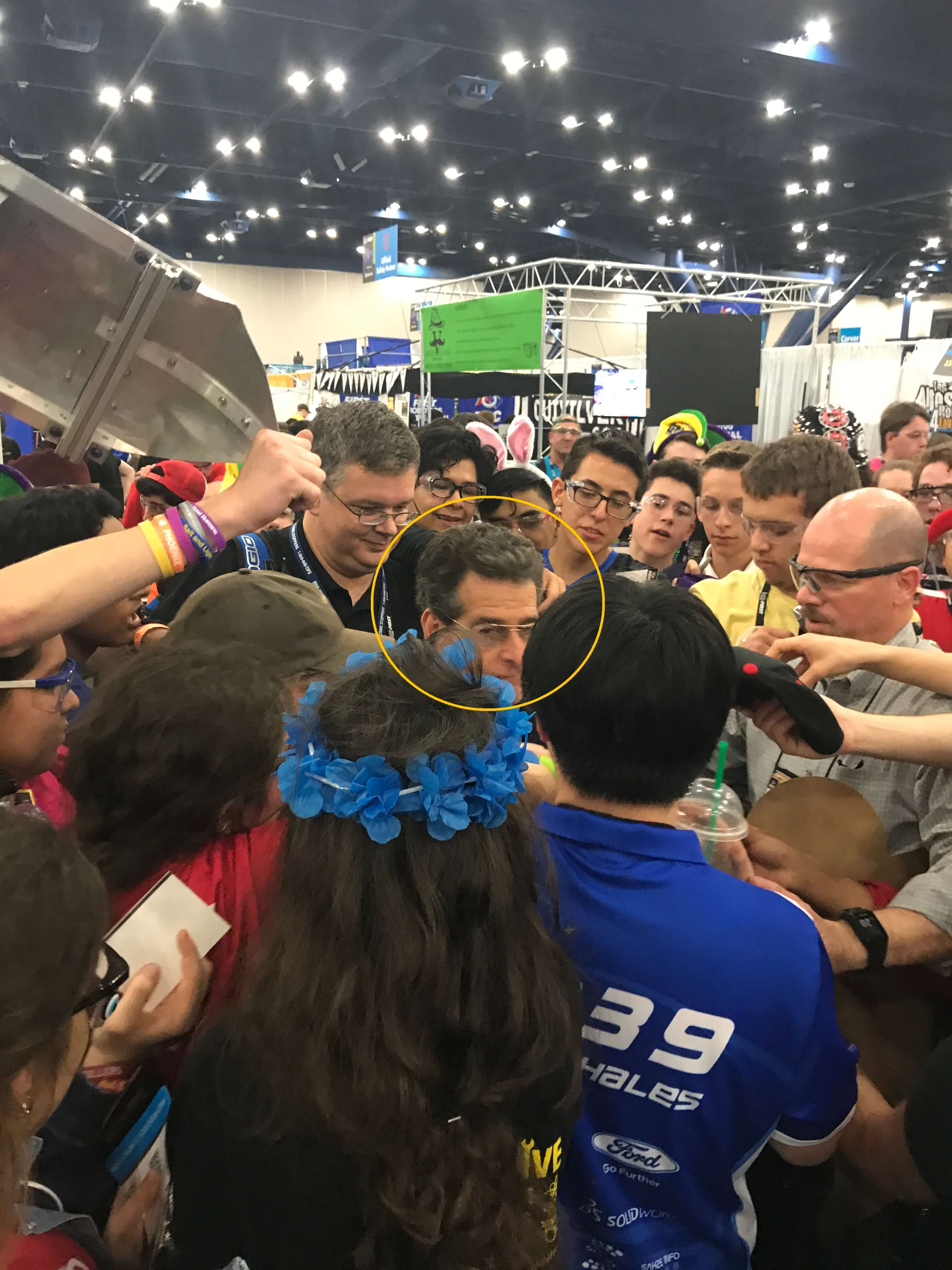 Dean Kamen at the center of attention.

When time permitted, we were able to watch a few matches and experience the intense competition.  My last post during the regional was just one small piece of the energy, Worlds was another level of energy, almost cosmic.  The spirit was raised to another bar. 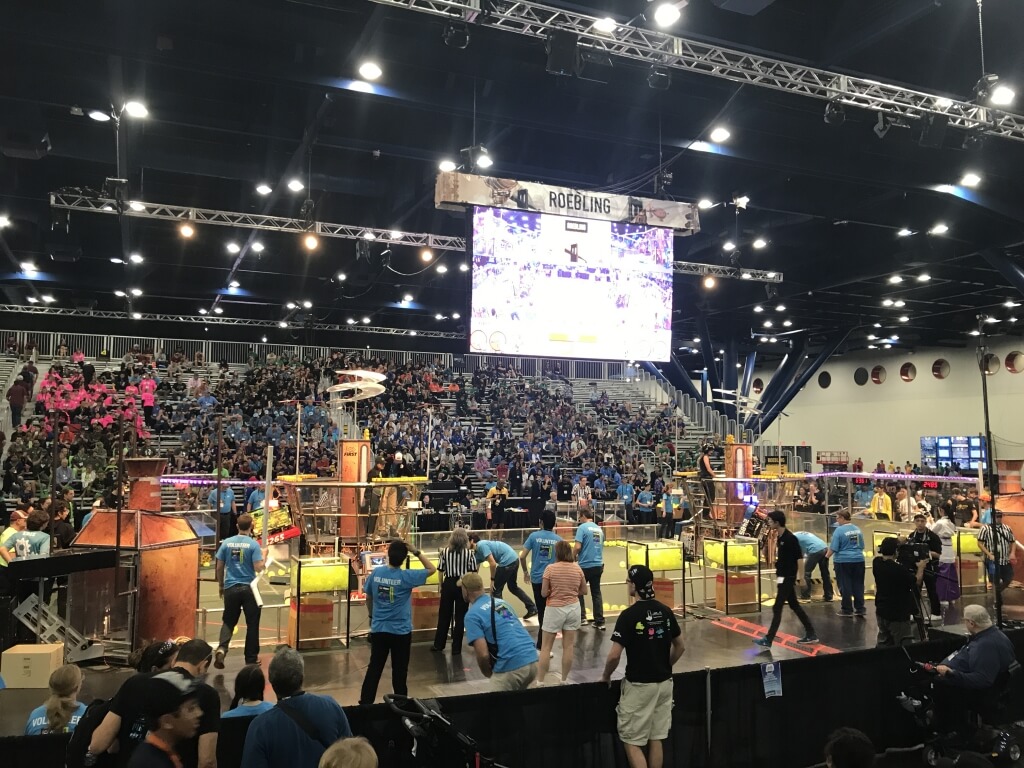 Roebling, one of the divisional playing fields.

Up next, behind the scenes at the St. Louis Championships, stay tuned!

For an in-depth view on what it is like to be an emcee at a FIRST® Robotics event, click here!