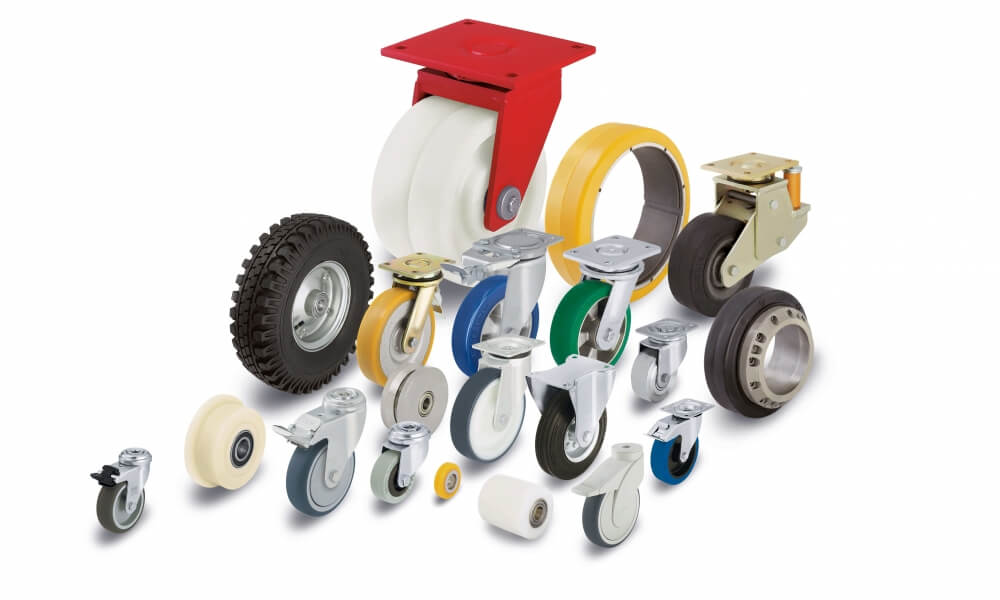 Push and Pull with Ease: Ergonomics and Caster Wheels

Alongside lifting, holding, carrying and placing, pushing and pulling are some of the activities which are most frequently involved whenever people have to move loads manually. These physically strenuous activities are particularly common in a production and logistics environment, and put employees under significant risk. Depending on the weight of the goods being transported, pushing and pulling can require an enormous amount of strength and can overload muscles, sinews, tendons and joints over time. This can have an effect on the spine, knees, hips and the entire hand-arm-shoulder area.

In order to reduce the risk of injury and disorders, many countries have introduced guidelines restricting the maximum load which can be transported manually. In Germany, this took the form of the Load Handling Regulation (Lastenhandhabungsverordnung). Experts recommend that we don’t use more than 15% of our maximum muscle strength when involved in a prolonged activity. The problem is muscle strength varies widely from person to person. It is also extremely difficult to make an accurate assessment of how much strength will be needed to push or pull a load in practice. It is therefore almost impossible to define specific limits that employers and employees can use for guidance.

130 million sick days per year due to musculoskeletal problems

This makes it all the more important to ensure that any work which is carried out repeatedly is made as ergonomic as possible. If you need proof, just look at the statistics related to sick days: According to the annual health report released by the Federal Association of Company Health Insurance Funds [Dachverband der Betriebskrankenkassen] (BKK), musculoskeletal problems are frequently the main cause for being unable to work. According to the Federal Institute for Occupational Safety and Health (BAuA), this issue alone was the reason for 130 million sick days in 2015. This means that tissue-related and musculoskeletal issues cost the German economy around €25 billion, or 0.8% of its GDP. There is, therefore, a significant financial incentive for companies to improve working conditions.

One reason for these alarming figures is our changing demographics. In many countries, people are working much later in life. Older employees are generally more susceptible to health problems like back or joint pain. Most at risk are employees who work in manufacturing, logistics, or construction. These are trades that frequently involve pushing and pulling, and therefore have a heavy impact on the body.

In one way, pushing or pulling loads makes work easier. If something is too heavy to hold or carry, vehicles and transport equipment with wheels or casters are frequently used to reduce the amount of effort required. But moving these around can be tiring as well. This is down to the resistance that you encounter when you set off, roll, change direction, or go over an obstacle. The nature of the resistance depends on a number of factors, like the surface you are moving on, the weight of the load, and the bearing type and arrangement. But the quality of the wheels that you use is also extremely important.

Starting and rolling resistance is involved whenever you push or pull a load. Force will always be required to get a stationary wheel moving, and also force is still needed to keep it moving consistently. The tread constantly compresses and decompresses whenever you roll a load across the floor, so some energy is wasted due to the internal friction in the tread material. This then results in rolling resistance. Increasing the wheel diameter is one way to reduce rolling resistance, but choosing the optimal tread is also important. It can really make a difference, depending on the geometry, rigidity, and elasticity that you go for.

Additional force is required for every change in direction

Using swivel casters increases the swivel resistance for many activities that involve pushing and pulling. This resistance is the reason for the force required to move a caster to the desired position when changing direction. In addition to the factors mentioned above, swivel resistance is also affected by the offset of the caster housing, i.e. the horizontal distance between the rotation axes of the swivel bearing and the wheel.