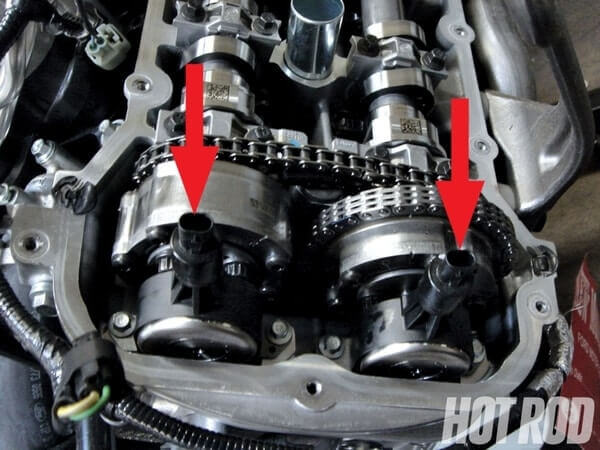 What are the Effects of Changing Cam Timing on Power Output and Fuel Efficiency?

Even though you may not be aware, nearly everyone has heard of cam timing and the benefits that it can provide for your engine. Most car manufacturers use some variant of the technology in their sports models, notably the VTEC engine from Honda, and the VVTL-i from Toyota. Other manufacturers such as Porsche, BMW, Audi, and even Ford use this technology as well. However, adjusting the cam timing of an engine isn’t just for sports cars; it can help any vehicle with boosting power and increasing fuel efficiency. 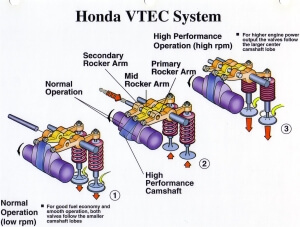 Variable Valve Timing (VVT)
Variable Valve Timing, or VVT, is the next step in engine evolution. Adding multiple valves per cylinder certainly made a difference, but efficient valve timing is tied to a specific engine speed. Manufacturers usually guess how the engine will be used, and will then tune the valve timing to that speed. For instance, a sedan would probably run the most efficiently at medium engine speeds, while a sports car might run more efficiently at a higher RPM. VVT allows the best of both worlds by adjusting the cam to match the engine revolutions. Now a performance car can have good power and torque at a low speed, say 0 to 4500 RPM, and then turn into a screaming banshee at high speeds. Click here for more examples of how racing engines utilize VVT.

How does VVT help increase efficiency?
Usually, during the four strokes of engine combustion, the exhaust and intake valves open one after the other without any overlap. As the engine speed increases, there is less time for exhaust and intake air to enter and leave the cylinder since the valve isn’t open as long. Here is where VVT can help: the timing can be changed to close the exhaust valve later and open the intake valve earlier. The valves will actually be open at the same time, creating an overlap. Some models also adjust the height that the valves open, giving more area for air to flow in and out of the cylinder. The faster the engine runs, the more overlap is desired to increase efficiency. 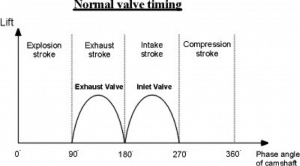 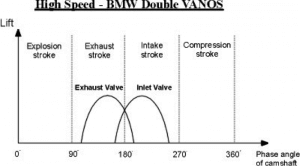 Benefits of VVT
There are many benefits to using VVT and virtually no drawbacks. One benefit is an increase in maximum engine speed (and therefore more peak power) – as much as a 25% increase. Low speed torque is also increased, providing better handling and drivability. You may think that it is counterproductive to have an overlap in the exhaust and intake valves because that means exhaust gases are reentering the cylinder. However, exhaust gas recirculation (EGR) is a staple of emission control and can be enhanced by using VVT. Maximum overlap usually occurs at high speeds, but if it is used at medium speeds with a light engine load, for instance during highway travel, engine efficiency increases. The exhaust gas recirculation reduces the amount of fuel needed to run the engine and therefore boosts the all-important MPG number.

The only minor drawback to VVT is the additional cost and complexity of adding the system to an engine. There are multiple ways to add VVT, and each manufacturer has its own little tweak, some simpler and cheaper, others more complex and costly. Regardless of design, the long-term benefits of increased fuel efficiency and power output outweigh any upfront cost, especially when looking at the multi-year investment of a car.

So, does all of this fancy talk mean anything for the average car driver? Probably not, but it may give you something to ask the sales staff the next time you are looking for a new vehicle. Racing and performance enthusiasts will certainly be interested in understanding how different technologies for VVT can affect the output of their engines. One thing is for certain: as the demands for fuel efficiency are increasingly regulated, manufacturers will continue to find new and cost-efficient ways of incorporating VVT into everyday cars.

Interested in learning more, or have questions for us? Check out our website for more product offerings, comment below, or call one of our experts at 800-681-7475!