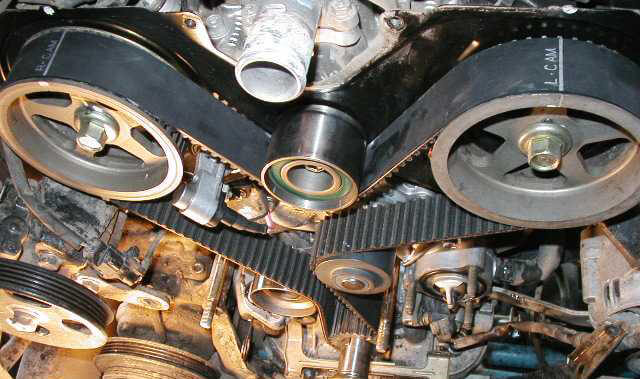 A Guide to Timing Belt Sizing and Selection

Selecting the ideal timing pulley to optimize the performance of power transmission systems can be an intimidating task without some basic knowledge about the various drives available to build transmission systems.  This quick comparative guide will serve as an introduction to the preliminary principles of belt sizing and selection for various drive system types so that the system design engineer can be better equipped to optimize the construction of drive systems.

The Roller Chain Drive is a common, inexpensive transmission system that can be used in conjunction with a number of various lug and pulley designs.  They are also extremely durable and can be employed in even in the most extreme application environments.  Chain drive systems, however, are noisier and can be more vulnerable to wear failures than equivalent polyurethane or elastomer belt systems.    Because of this, chain and sprocket drives usually require an active lubrication system and generally must undergo more frequent maintenance intervals.

A friction drive system requires a pulley system design that is able to maintain the specified belt tensions that are necessary in order to transfer power reliably without slipping of the belt.  In some cases, these belt tensions may lead to excessive loading on the pulley or sprocket bearings and could result in an overhung load on the pulley shafts.   Because of this, the system designer must perform the due engineering diligence in order to ensure that every component in the drive system is robust enough to handle these loads, which means that the drive system might be comprised of larger structural components when compared to a comparable chain drive.  As alluded to previously, these types of friction systems are also prone to slip under higher loads and speeds and should not be used for such applications where such slipping is not desired.  Additionally, since both types of drives can generate large amounts of heat, additional equipment heat sinks or cooling systems may be required to be designed into the system.  Finally, the biggest downside of frictional belt systems such as flat and V-belt profiles is that they simply aren’t able to transmit as much power as a comparably sized synchronous belt drive system. 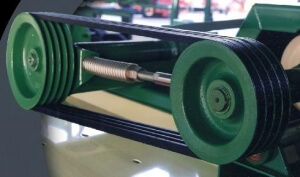 For these reasons, while the V and Flat belt drive systems can be serviceable for a wide variety of applications, but their uses are more limited under high performance design requirements such as high speed/load demands where there is also a desire to minimize system noise.  They are also not ideal for applications where design space is limited and a small, streamlined, and structurally optimized drive system is desired.

Finally, although they are typically the most costly drive systems, timing (or synchronous) belt drive systems possess a toothed profile and are ideal choices for high performance applications because they maintain system synchronicity far more effectively, when compared to flat or V-belt drives.  Timing belt drive systems also possess a high power density when compared to flat or V-belt drives, which means that smaller belt and pulley drives can be employed for the transmission of equivalent loads.

However, for specialized applications, they are sometimes the only option because of their power and torque transmission capabilities. 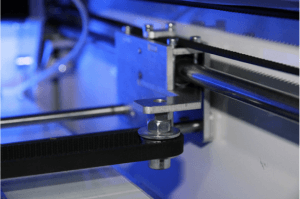 Belt and Pulley System on a 3D Printer

Introduction to Sizing and Selection:

After grasping the more substantive differences between the types of belt drive systems, the system design engineer can move on to determining the size of the drive system needed, based on the desired magnitude of loads that will be transmitted.

The first and probably most important design factor that must be calculated is the system design power (Pd)  To accomplish this, the system design transmission power (Pt), which is the real measure of the power needed to accomplish a particular motion application, is multiplied by a specified overload factor (Ks) which is employed to conservatively account for any dynamic overloads that may be present during the operation of the system.   The derivation of this factor depends on a number of variables such as the type of belt specified, and the full details can be found in the configurable timing pulleys and timing belts catalog.

The second factor to be calculated for the drive system is the required belt width which is a direct function of the design power of the application.  Reference belt width (Wp) which depends on the belt type is multiplied by a factor that takes into consideration the desired design power of the system (Pd), the Reference Transmission Capacity (Ps) and the Engagement Correction Coefficient (Km).  The task is relatively easy to perform, as the standard handbook lays out all the steps in the process, defining the variables, and the equation is represented below. (Page 129 of MISUMI’s Configurable Timing Belts and Pulleys Catalog also contains comprehensive step-by-step examples, and can be downloaded here.)

Although there are other system design factors that need to be calculated in order to complete the drive selection process, these two parameters- system design power and belt width, are a solid starting point to begin building the drive system.   This brief overview of the various types of belt drives that available to the automation system designer should serve as a solid reference point for further inquiry into these subjects.   The fundamental point to remember when designing a power transmission system is that each application is unique, and there is not a “one size fits all” belt drive that can be employed for every possible application.  Some design applications may be ideal for a basic flat belt system, while applications may require a highly specialized timing belt tooth profile.