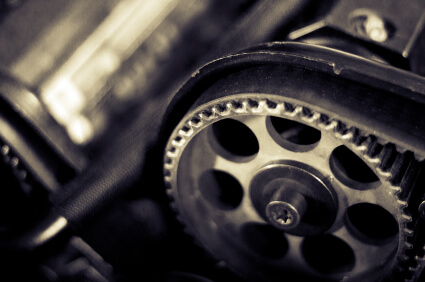 A careful assessment of all potential environmental factors must be undertaken in order to determine exactly how the operating environment will impact the design of the transmission system. For example, extreme temperatures or the presence of local contaminants in the drive system can lead to premature wear or failure of the belt.  However, sometimes the main environmental concern isn’t always the outright failure of the belt, but is instead the safe, serviceable operation of the belt and all related components.

Typically, the limiting component in drive systems subjected to extreme temperatures is the belt.  At very high operating temperatures, belts may soften, which can cause a loss of tension in the drive system and lead to outright loss of load transfer capabilities.  At very low temperatures belts become vulnerable to embrittlement and/or cracking which can eventually lead to an outright fracture of the belt. 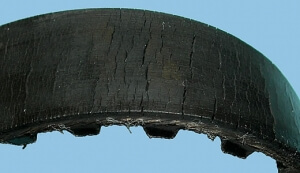 Cracks in a timing belt

Most belts are serviceable for temperatures approaching ~180°F (80°C) on the high end and temperatures down to nearly -30°F (34°C) on the low extreme.  However, high performance High torque timing belts comprised of special polymer and support materials can be specified for applications that demand serviceability at wider temperature ranges.

However, at these extreme temperatures, sometimes the drive pulley actually can become the limiting component in the drive system and therefore cannot be overlooked for serviceability under these conditions.  Belt drive operating temperature considerations are typically the most common factor to be considered, and as such, but this cursory assessment should provide a solid starting point for further consideration.

Other environmental factors to consider include the presence of foreign contaminants in the drive system such as metal shavings, dust, and/or other abrasives, as well as chemical exposure, can lead to excessive and/or premature wear of the belt.  This is typically manifested as small, uneven cracking across the back of the belt.

The most commonly seen environmental contaminant is probably oil or grease.  Depending on the belt material, even small amounts of grease or oil contaminant exposure could potentially cause the belt material to experience an accelerated wear rate and a premature failure compared to what would have occurred during uncontaminated belt operation.  In these cases, specialized rubber or urethane belts are far better suited for service in drive systems.

Left: Metal shavings can cause damage to a timing belt Right: Grease and Oil can prematurely wear a belt

There are additional belt design specifications that can be selected depending on the application.  Some drive system applications may be vulnerable to fire and/or malfunction as a result of static discharge from the build-up during operation of the drive.  In such cases, a specialized, anti-static belt can be specified in order to guard against this concern.  In other applications where belt drive systems are to be employed used to directly contact and transport food, a specialized belt can be specified that adheres to rigorous food sanitation laws.

There can also be other exotic contaminants to be considered in certain unique applications.  For example, if a belt drive is operated an ozone rich environment, a specific ozone resistant chemical specification can be added to the urethane or rubber belt specification in order to add protection against this specific type of hostile environment.

It can sometimes become easy for the drive system designer to lose sight of the actual belt drive operating environment and move on prematurely to sizing specification calculations, but it is only firmly within the context of such environmental considerations that the designer can holistically consider which type of belt drive system should be employed for a specific automation application.

In closing, operating environment greatly impacts the overall serviceable life of the drive system, and it simply cannot be overlooked during the belt drive system specification process.  It is only after all environmental considerations have been taken into account that the more detailed calculations of drive sizing specifications can commence.

A micrometer is one of the instruments used ...

We’ve Got the Power (Supplies)!