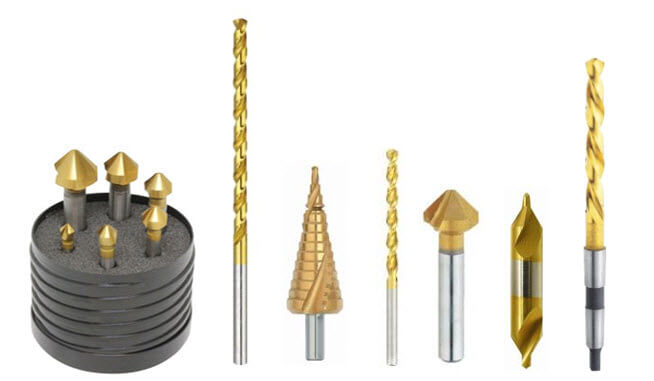 We’ve touched upon several surface treatments in past posts such as electroless nickel plating. In this post, we will dive deeper into TiN coating. This coating is used in numerous industries such as automotive, medical, aerospace, food processing and energy. TiN surface treatment is titanium nitride, a gold-colored ceramic coating. But before we dive into TiN, let’s review the ceramic coating process.

About Ceramic Coating and PVD

Technologies used for forming ceramic films on metal substrates include plasma spraying and PVD. This ceramic plating is classified as a form of wet plating and a technology where the ceramics are electrocrystalized and sintered on a metal substrate. Using the term “plating” for this method could be a little awkward. However, since the principle of forming ceramic films on the anode metal by energizing it in the aqueous solution is similar to that of electroplating, it is referred to as “ceramic plating”.

Metals that are compatible with this plating method are those that can form passive films by being energized in the electrolyte, such as aluminum, magnesium, and titanium. To be able to use them for plating, these metals must be anodized.
Using silicate salt for the electrolyte solution is another important factor to remember. The anode surface becomes passivated by the electrolysis, followed by electrification and plasma discharge. The silicate attracted on the anode will be sintered and then turned into a ceramic.

Adhesion properties of the deposited films are excellent. In addition, the films are superior in heat resistance and rated well on corrosion resistance. Since the films can be colored while they are resistant to bending and work well with the post-processing, ceramic plating is adopted for various applications, from decorative items such as high-end wall materials, kitchen items to functional applications including the products utilizing characteristics as far-infrared properties, resistance to ultraviolet rays and radiation, and vacuum-proof properties. It is estimated that the film can be deposited for up to 50 um.

It is applied to material via PVD or physical vapor deposition. PVD is a vacuum coating technique where solid metal is vaporized then deposited onto the metal substrate and is environmentally safe.

TiN is a non-stick surface to prevent material build-up. It is a coating that protects sliding surfaces. This is especially critical for hot stamping and welding applications. It is gold in appearance but much stronger than gold.

It is popular use is in drill bits and end mills due to its strength and corrosion resistance. The coating keeps its cutting edges intact. TiN is also commonly used in medical devices for that reason. There are also a few studies on TiN being used in surgical implants such as hip replacements. It is a non-toxic coating that also meets FDA guidelines.

One can find TiN coating on MISUMI end mills, step drills, drill bits and NAAMS locating pins. In NAAMS locating pins, TiN coating is beneficial in hot stamping applications which prevent aluminum build up on the pin. Build-up on the pin prevents the aluminum material to be placed accurately. TiN provides a lower coefficient of friction on the metal substrate which makes the metal build up fall right off.

In the titanium coating family, there is also TiCN which is Titanium Carbonitride which is grey in color. Also, providing wear resistance and adds strength to the metal substrate. It differs from TiN in the hardness level at 87 Rc and 3000 Vickers. One can find TiCN coating on MISUMI locating pins as well as press die punches.

Be sure to check out previous posts on surface treatments below!