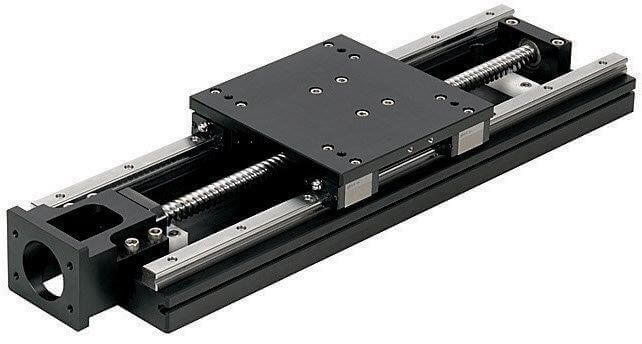 The challenge for mechanical automation systems in the past has been the successful conversion of rotational motion from electric or mechanical motors into useful forms of linear motion.  A breakthrough in this regard, the conveyor belt system represented one of the first useful implementations of rotary to linear motion conversion for use in a production environment.  These systems are able to transport a wide variety of raw materials and workpieces in a far more efficient manner than could previously be accomplished by the use of brute mechanical forces and are extremely useful in production environments.

Today, significant engineering work in the field of rotary motion conversion has yielded a diverse class of linear mechanical actuators which are useful for a broad range of advanced automation applications.  The challenge is selecting an appropriate actuator for the desired functionality, be it simply the movement of raw material in a manufacturing environment or the construction of more advanced motion systems designed to move tooling into precise positions.

In order to select the proper linear mechanical actuator, some important considerations, such as the desired load capacity, or thrust force, and necessary stroke distance, must be taken into account.  While these are primary considerations, others such as maintenance burden certainly play an important role as well.

Two widely used types of mechanized linear actuators are differentiated by their drive mechanisms- belt-driven and ball screw driven actuators.  Both types are employed in similar types of applications, but the two differ significantly in function.  Each type possesses unique strengths and important limitations which must be carefully considered in the selection of an actuator.

Belt-Driven Actuators: The belt-driven actuator operates under the same principles as the conveyor belt system.  The belt drive translates rotary motion to linear motion via a timing belt connected between two circular pulleys.  The timing belt is usually made from a fiber-reinforced elastomer, but many other belt materials are available for more demanding applications.  The belt contains teeth that interface with the rotor pulleys to efficiently transfer torque and prevent slipping.  The belt drive is enclosed within an aluminum body while the carriage rides on top, and the driveshaft interface is typically situated perpendicular to the side of the actuator.

Strengths and Limitations of Each

Belt-driven actuators are generally preferred for applications requiring long travel distances, which can be achieved more cost-effectively than could be accomplished with a similar length ball screw driven actuator.  Additionally, the belt-driven actuator is generally more efficient, possessing fewer critical moving parts, thereby making for less labor-intensive maintenance.  Despite this, adequate tension of the belt is critical in order to ensure proper transfer of torque, and re-tensioning of the belt at periodic maintenance periods is usually necessary.

Alternatively, the ball screw unit closely resembles a rolling ball bearing system and thus is capable of carrying higher loads and achieving a higher thrust force.  For this reason, ball screw driven actuators are ideal in applications where the positioning of large, heavy loads may be necessary to a high level of precision.  Periodic lubrication of the ball screw may be required depending on the specific actuator design.

Further comparison between the two actuator types reveals additional drawbacks to the belt-driven actuator, despite its simplicity and efficiency.  Significantly thicker belts are required for higher load/thrust demands.  The belts are also susceptible to shock loads, although this concern can be mitigated to a certain extent by the careful selection of belt materials which can add strength at the expense of elasticity.  Additionally, due to the vulnerability of the belt to elongation, the positioning accuracy of ball screw actuators tends to be superior to that of belt-driven actuators.  Because of this, ball screw driven actuators are preferred for applications requiring high degrees of reliability and repeatability over extended time periods.  Ball screw driven actuators are the preferred choice for high acceleration and high thrust demands, as the belt drive pulley is vulnerable to slipping at the rotor under such repeated demands.