In addition, if high-speed rotation or operation for long hours is required, it is necessary to consider design items related to the reliability matters described here. 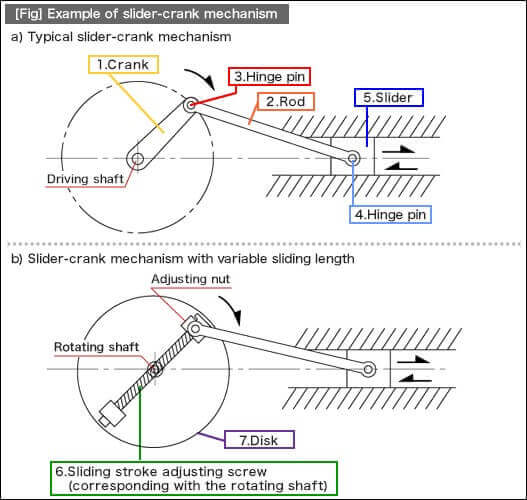 The figure below illustrates the mechanism with exchangeable rod/slider parts. A U-shaped hook is installed so that the tip of the rod can be easily connected to the hinge pin at the hinged end of the crank.

Because of this simple coupling method, where only a U-shaped hook is placed over the rotating crank, this mechanism is not compatible with the following types of motion:

How to use a slider-crank mechanism

Below is an automation clever mechanism that converts crank rotation into linear motion and makes the linear motion stroke twice that of the original one.

In this structure, the slider used in the standard slider crank mechanism a toothed gear. In addition, the slider guide is separated into a fixed rack and a movable rack. The crank motion on the driving shaft is transmitted to the toothed gear. Then, the stroke of rolling motion (L) over the fixed rack increases by 100% (2L) when it reaches the gear top. This stroke (2L) acts on the movable rack installed on the gear top.

The structure tends to be longer than originally intended if a pneumatic cylinder and a linear guide are used or if a structure where ball screws are used for connecting a motor is adopted. This automation clever mechanism is an effective solution for making the fixture short and compact.

Rotary motion can be converted into linear motion by using a screw. This volume introduces an automation clever mechanism that allows control of linear motion in various ways by adopting different types of screw structures. “Threaded” and “tapped” screws are used as a cam.

If the handle installed on the right edge is rotated, it causes a linear motion of the slide block placed on the two tapped screws that are assembled to the opposing two screws. This structure can also be applied for a double-speed mechanism, where single rotation of the handle is transformed into a movement of twice the pitch of the rotation.

A cam is the typical mechanical component used in the rotary-linear motion conversion mechanism. In this volume, we will look into application examples of the cam.

Cams are the excellent choice because of the following characteristics:

Based on these characteristics, cams are adopted in various applications including the terminal press-fitting mechanism of a high-speed terminal press-fitting machine, as well as the high-speed and complex timing control of an air release valve for an automobile engine. (See [Photo 1].) In the photo below, displacement of the plate cam is enlarged by the link mechanism. To ensure the high-speed responses, springs to prevent jumping have been installed. 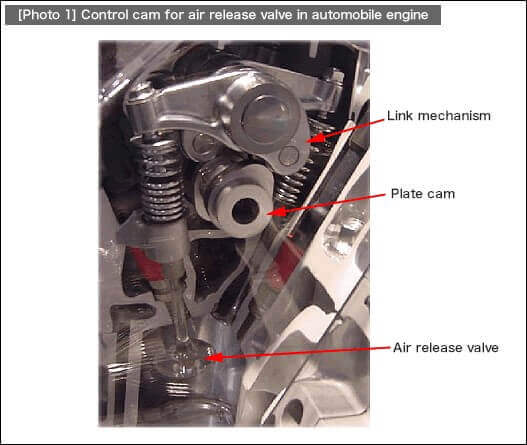 A cam introduced here as the basics of automation clever mechanisms works as a supportive element that allows for quick attachment/detachment of fixtures by transforming the linear motion displacement into forces, rather than converting rotary motion into linear motion, which was explained earlier as a superior characteristic of cams used in motion control.
In [Fig.1], the rotary-linear motion conversion mechanism using a typical plate cam and a reciprocating follower is shown left and the one-touch clamp mechanism next to it. 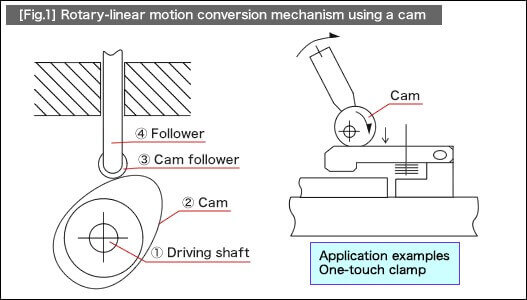 Rotary to linear motion conversion can be configured with a variety of components and achieved with varying degrees of accuracy and strength. We hope that you have been inspired by these simple mechanisms.