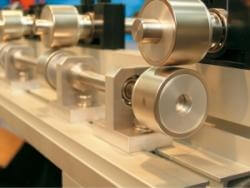 How much misalignment is allowed with Magnetic Transmission Drives?

It is critical that the magnetic poles on each unit are properly aligned, but how much deviation would be acceptable? The units have worked fine even with 2-3 degree misalignment, but this misalignment will end up affecti ng the transfer torque. 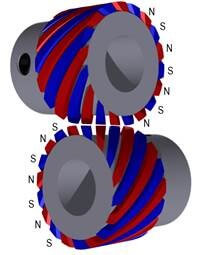 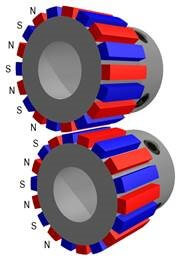 Can these units work with high RPM applications?

Due to its no contact design, Magnetic Drives are not designed to run at extensive RPM rates. The RPM rate will vary depending on size and configuration, but sizes 22 and up were able to run without any issues at 1500RPM without any load. Please, remember that due to its fairly low torque rate, it is crucial that the system’s motion profile is not erratic and acceleration and deceleration stay at low values.

Will there be any backlash while using the TM Magnetic Drives?

This product generates no backlash. Most rotary transmission components like belts and gears are known to generate backlash. The attraction force between poles used in this product will only slightly vary and it will depend on alignment of corresponding magnets. If one pole is perfectly in line with the pole on other unit the force is at maximum and it will slightly decrease when the unit is in a transition point from one pole to another.

It may affect the position, but only marginal deviation will occur when some drag force is present. It is not considered as backlash, but more as an angular resolution of each of the magnetic poles. Therefore, if the product will rotate 360 degrees, it will always end up in the same exact position.

What is the flow of Magnetic force of the TM Drives?

The design of the TM drive creates a “magnetic loop” between the closest magnetic poles on both sides. This minimizes magnetic leakage while providing excellent magnetic force during operation. However, using a magnetic shield would be recommended when magnetically susceptible objects are placed near.

How would magnetization pattern affect the performance of TM Drives?

If the number of magnetic poles would be increased or decreased, it would negatively affect the performance of the unit. The number of poles in each design was designed for combining optimal torque and smooth operation.

Can the TM drive generate heat or static electricity at high RPM rates?

The product would not generate heat unless it is a frictional heat when it becomes disengaged. It also will not generate electricity at high RPM rates unless the torque or inertia will cause the magnets to “slip”. It may have an undesired impact on other parts in the system. It is very critical to avoid any loose magnetic matter within proximity of this product. It is also recommended that the drive is magnetically shielded from any components that may be affected by magnetic field.

Can the magnetic force be adjusted?

It would be possible to design a unit with smaller attractive force, but the only torque adjustment would be changing the gap between units.

Would it be possible to combine different sizes of TM Drives in order to change “gear ratio”?

Unfortunately, it is not possible to do that since the individual poles for each size have a different pitch.

What is the maximum allowed gap size for TM Drives?

For OD of 22 for example, the maximum allowed gap is 3mm, but this would greatly affect the transfer torque. A weak transfer torque is sometimes required for some applications. The 35mm diameter can be used with a gap as big as 5mm.

What is the life expectancy of a TM Drive?

The TM drives are designed with permanent magnets and as long as it is used according to given specifications, the product should lose about 1% of its torque over a period of 100 years.

How to interpret “Flux rate by temperature” chart in the catalog?

The TM Magnetic drives can be used within certain temperature range. If the product is used in temperatures above the given range, it will cause a demagnetization of the product. The chart shows the demagnetization curve. There are two curves. Pc=1.0 and Pc=2.0. PC=1.0 is used for TM drive, while Pc=2.0 is a scale used by motor manufacturing industry.

Can the TM Drive be used in low temperatures?

Yes. The TM drive can operate in temperatures as low as -50 deg. Celsius.

Please, remember to verify that other components used in conjunction with this product can operate in these temperatures as well.

Can the ID of the Tm drive be modified by the customer?

It is not recommended to modify the unit in any way. If any changes are made, Misumi will not honor our warranty in case of product failure.

What would be a safe distance between each set of drives to avoid interference of their magnetic fields?

Can this product be used in water of vacuum?

There is no issue using this product in submerged or vacuum applications. The coatings used allow this type of use. It also proved to be durable in hydrochloric acid (30%) for (160 hours). As to any other chemicals, it is recommended to perform resistance tests in these environments. We welcome any test result data, so we can share it with all of our customers.

What should I consider while designing an application using TM Drives?

Do you have any Application Examples using the TM Magnetic Transmission Drive?