Feed screw is a mechanical element used to convert rotational motion to linear motion, or to generate large forces. The types and required performances are as follows.

Ball screw’s operating performance is characterized by its very small friction resistances. This is due to its structure that transmits forces with rolling motion of the steel balls similar to ball bearings. When given the load and lead screw dimensions, the following formula gives you the torque generated.

Dynamic friction torque is the friction resistance in dynamic condition and is affected by the amount of preloads determined by steel ball size in relation to the screw groove size as well as lubricant characteristics.  It will also vary according to the screw shaft rotational speed.  In the case of oversized ball arrangement, the dynamic friction torque dramatically increases depending on the oversize amount, (See Figure 1a).  In the case of double nut arrangement, larger number of steel balls used and longer length of contacting screw groove reduces dynamic friction torque variations due to averaging effect, (See Figure 1b). 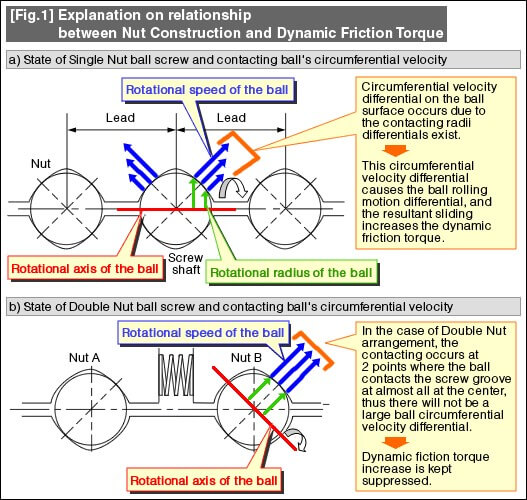 Friction torque variations affects motor’s speed variations, therefore linear motion velocity irregularities and positioning accuracy variations can be caused.  Allowable torque variation rate is defined in JIS B 1192.  For example, a C3 grade ball screw with an effective thread length of 4000mm or less with reference torque of 0.2~0.4 Nm is allowed a torque variation of ±45%.  This is a guideline to follow when specifying ball screws in applications and designs.

Thus far, ball screw characteristics, preloads and performance have been reviewed, up next the optimization of ball screw speed is examined, stay tuned!