Positioning stages of all styles and sizes are used in a diverse range of motion system applications to restrict and control both position and motion of subcomponents within assemblies.  Platforms with threaded holes serve as anchoring points for other equipment and are used for mounting tools, inspection equipment, etc.

Both manual and motorized driven stages are usually available for single axis motion, although multiple axes are achieved through user design or commercially available combinations, such as XY, or even XYZ, positional stages.  Linear, one-dimensional stages are used to position along a single axis.  Conversely, multi-axis stages are comprised of one or more linear stage, oriented in opposing directions in order to achieve positioning in multiple axes. 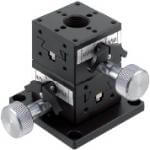 The inherent differences between manual and motorized stages lend each to an ideal functional use, applicable in a range of motion applications.  Manual stages are acceptable for smaller scale use such as the positioning of specialized dimensional inspection equipment.  For example, multiple axis manual stages are used for hand positioning specimens for examination in microscopy or other advanced optical examination techniques.  However, there are a number of application demands where the engineer would be wise to consider a motorized positioning stage:

High Loads: The most obvious use for a motorized stage  occurs when the loads on the stage are too large to be able to utilize the hand knob to effectively  position the platform.   In applications where heavy loads are to be handled, the force required to turn the manual positioning knob on a manual stage may be very difficult for a person to operate.   In some cases, it simply may not be feasible to design a manual handwheel-type system large enough to be able to accommodate manual indexing of the position stage.   For this reason, motorized positioning stages are almost exclusively employed to position heavy loads.

Automated Precision:   Although manual positioning stages are capable of achieving high degrees of precision, there are also motion applications that demand that numerous positions be achieved within extremely short time intervals which may be impossible to achieve via a relatively imprecise manual operation.  This sort of application demand can be best accomplished by a motorized stepper which can be programmed to move by precise increments, each and every time.

Space Restrictions:  Given the physical space restrictions that may exist within a desired motion application, it may not be physically possible to afford enough space to allow for unrestricted access to a manual hand knob for positioning purposes.   Consider that the hand knob must be manually dialed by a person, requiring a much larger space envelope around the stage than a motorized positioning stage typically would. 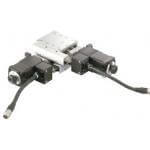 In conclusion, the motorized stepper stage functions extremely effectively under high loads, to a high degree of precision via an automated motion controller which doesn’t require physical access to the stage.  Whereas a manual stage may be more than adequate for simple functions such as the positioning of specimens under an optical microscope, higher degrees of precision and repeatability may be required to position larger equipment or workpieces for precise machining or inspection operations.  The motorized positioning stage is also the best choice for applications that require repeated positioning with higher frequency (i.e., multiple times per minute).  This would be nearly impossible to achieve via a manually driven positioning stage.

Manual positioning stages are typically employed in individual applications for the precise positioning of small parts or work pieces for additional inspections or measurements.   In contrast, motorized drive stages are employed in fast paced, automated environments for applications where high loads/speeds may be present and physical space comes at a premium.