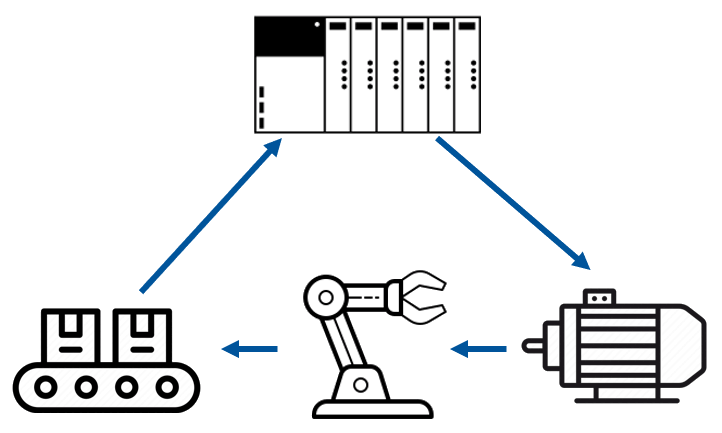 Ethernet/IP vs. EtherCAT: The Race Against Time

Ethernet is a very familiar term to many as it touches many parts of our lives.  It allows us to send emails, download movies, and move a lot of data across networks.  So how does this technology move beyond consumers and into an industrial setting?

Due to electromagnetic noise, corrosive liquids and extreme temperatures, commercial and consumer-grade Ethernet equipment cannot operate in an industrial environment.  To prevent electrical noise from disrupting commands, a shielded Ethernet cable is required.  Robust jacketing preserves the physical integrity of the cable from oil, liquids, and temperatures using PVC, PUR, or TPE materials.  These physical structures include PLC’s, routers, and end devices but are only part of an industrial network.

Protocol is a very important part of a network design because it dictates the speed and quality of command delivery.  Imagine operating a facility bottling soft drinks.  This is a high-speed process filling thousands of bottles each hour.  When the filling machine needs to slow down, a command is sent to the motor rotating the table, the pump controlling liquid flow, and a variety of other integral systems.

Industrial networks, therefore, rely on protocols that confirm the delivery and execution of commands.  There are several protocols that exist.  This article focuses on Ethernet/IP and EtherCAT.

Ethernet/IP is Ethernet with industrial protocol (IP) and is designed to work with automation equipment.  This provides nearly real-time status of equipment operating on the network and ensures command delivery.  In the example above, if the motor received the command to slow it would send a confirmation back to the PLC upon receipt and completion of the task.  If the pump does not receive the command, then it will not send a confirmation.  The PLC will repeat commands to the pump until such a point that the machine is stopped.

When setting up, this industrial network looks like one found in an office except that the end devices:

The technology required to set up a network using Ethernet/IP relatively common.  Many PLCs and automation devices have optional built-in Ethernet/IP hardware.  Simply adding a router and industrial-grade cabling is typically all it takes to complete the physical network.

Although this protocol is fast, the physical design of the network can create disadvantages.  As more devices are added, data moving back and forth can clog the network due to limited bandwidth.  For slower applications (injection molding, automotive assembly, etc.) this is not an issue.  But when you get into high-speed production (bottle filling, etc.) then speed becomes much more critical and Ethernet/IP may not be the solution.

For very high-speed applications it is essential to ensure the signal arrives quickly the first time.  For this, EtherCAT (Ethernet for Control Automation Technology) is a better choice.  Using a similar protocol, EtherCAT sends a command that moves across all devices on the network.  While this sounds cumbersome, this design ensures the command is received and processed.  In the bottle-filling example, the motor and pump may be the fifth and sixth devices in the network.  When the PLC sends a command to slow the motor and pump it is received and retransmitted by all preceding devices.  When the command reaches the motor, this information is processed, and the set of commands are sent on to the pump.  Eventually, the completed set of commands reach back to the PLC where it is confirmed that it arrived and was processed.

While this may sound more cumbersome, the dedicated hardware embedded in the EtherCAT devices ensures high-speed processing and transmission of commands.  This also ensures that commands will not need to be resent because of network bandwidth constraints.  The commands are guaranteed to arrive at the device.  EtherCAT also uses some of the same non-core components as Ethernet/IP, such as cables, which helps reduce the cost of the network infrastructure.

Overall, there are many options available to communicate over an industrial network.  MISUMI offers industrial-grade Ethernet routers and cabling.  These cables use thick robust jackets and M12 screw-style connectors to eliminate environmental ingress.  MISUMI has the latest in network routers, cables, and even the PLCs needed to run in the most demanding industrial environments.

Matt is a Senior Electrical Product Manager at MISUMI, holds a degree in Physics from Michigan State University and a Masters in Business Administration from Vanderbilt University. He has worked in manufacturing for over 15 years in various capacities but primarily automation.
Load More Related Articles
Load More By Matt Nemeth
Load More In Featured Articles