The parts feeder component alignment technology has been a mature technology since the industrial automation became popular since the early 1970s. But miniaturization of the parts to be aligned has increased the difficulty levels of alignment methods. 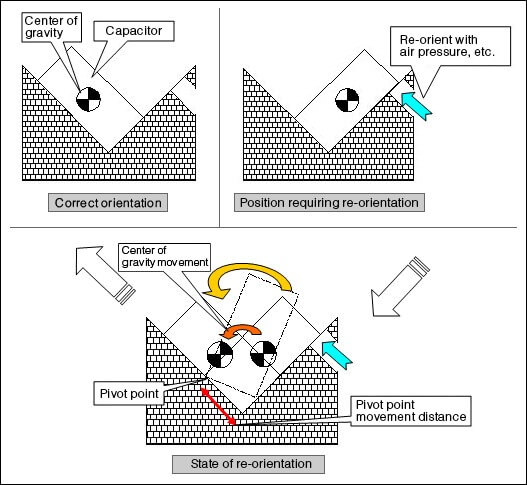 The difficulty level of component alignment technology increases as the component sizes are on the miniaturization trend. The following aligning processes are needed in order to align components, and the automation measures to orientation rotate chip components of around 0.5mm is a highly advanced technology that is an accumulation of Low-Cost Automation technology over a long period of time.

Relationship of part’s pivot point and center of gravity (CG), and the shift distance of CG are related to component alignment. For the component shape shown on the left side in the below diagram, 90-degree orientation change by compressed air is relatively easy.

As shown on the left in the diagram below, a measure to change the orientation of small capacitor easier by devising a shape to retain the component. (Patents are applied for by the manufacturers of automated chip aligning machines.)

In this case, the pivot point on the capacitor does not move, facilitating a smooth orientation reversal.

Surface mount components such as capacitors and insertion parts for assembly need to be top/bottom and for/aft orientation aligned. The orientation alignment will be based on the unique characteristics of the subject components (shape differences, identification markings, and etc.).

(1) When there are differences in front end and rear end shapes, the directional alignment is often performed utilizing the for/aft shape differences of the parts.

a) Movement of a part not requiring directional changes

b) Movement of a part requiring directional changes

Small parts such as shown in the above example are randomly put in a funnel-shaped vessel called “Hopper”.

This Hopper is vibrated finely to perform parts orientation change operation on the “Alignment feeder”.

There are following three vibratory methods for the Hopper. The vibratory hopper is also called Parts Feeder.

The rotary hopper or simply called a bowl.

Screws are stored in a vibratory bowl feeder.

Screws rotate counterclockwise receiving minute vibrations by a vibrating body beneath the bowel.

Based on the screw orientation at the alignment location (A), the screws are sorted in only one direction by the gate shape, and fed through to be aligned.

The vibrations will feed the aligned screws forward. 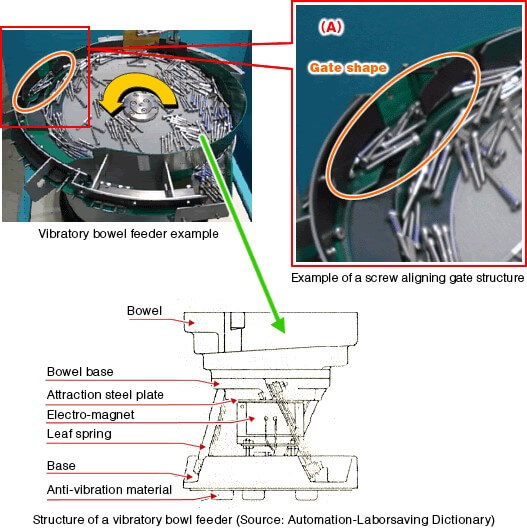 However, there are issues with vibratory feeders such as noise generation due to the vibrations, scratches and wear on the parts and rotary bowel and static charge generation.

Manufacturing technology such as component alignment is crucial to the success of many industrial processes. Especially in an age where compact in size but large in output is the trend.

Carlicia is a Product Marketing Engineer at MISUMI. She holds a bachelor's degree in Mechanical Engineering and a master's degree in Energy Engineering from the University of Illinois at Chicago. She is a Certified SOLIDWORKS Associate, Marketo Certified Expert, and is passionate about education and training.
Load More Related Articles
Load More By Carlicia Layosa
Load More In Tips & Tricks