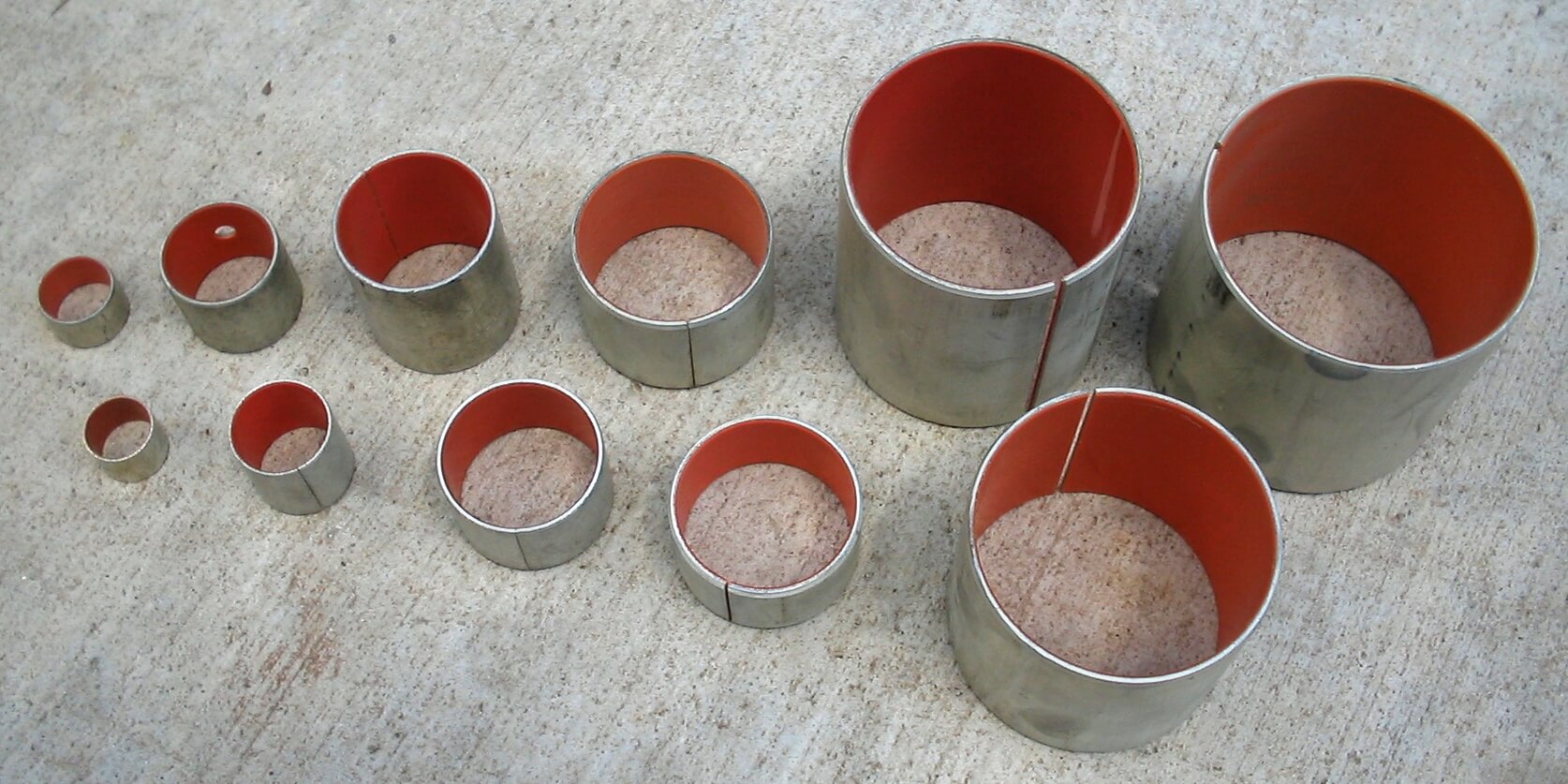 In our previous series, we talked about Working with Linear Bushings and different kinds of Sliding Guides in Part 1 and Part 2.  In this two-part series, we are first going to take a closer look at the two main types of bushings.  In the second article, we will discuss different drive mechanisms, and which bearings are better suited to each one.

There are three basic shapes that are available for linear ball bushings, with the main difference between them being how they are mounted: Straight, Flanged & Pillow-Block

Straight Bushings – This style of bushing does not have any mounting holes or plates on it.  It is simply a cylindrical ball bushing.  Examples of how a straight bushing can be mounted are shown below. 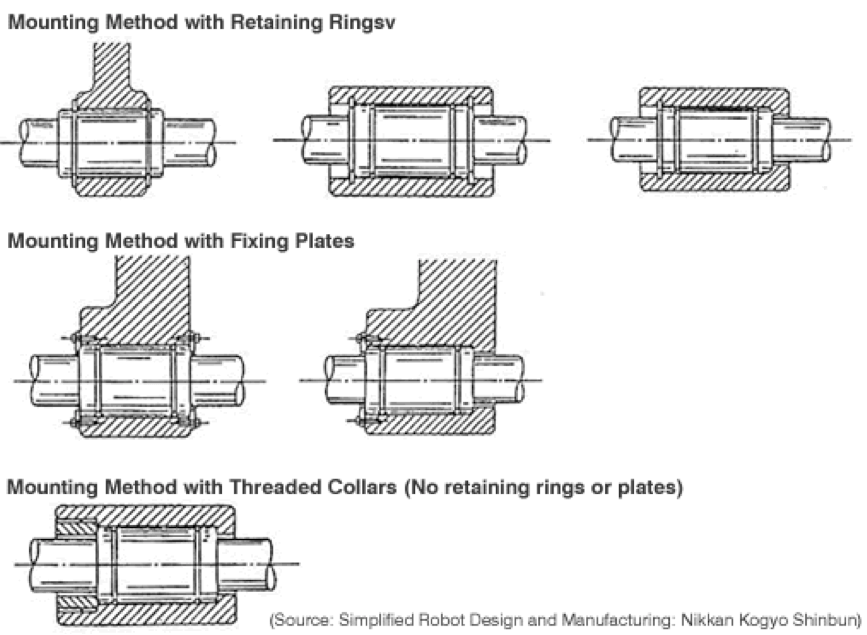 Straight bushings are usually mounted using either of the following (but not limited to):

Benefits of Straight Bushings include: 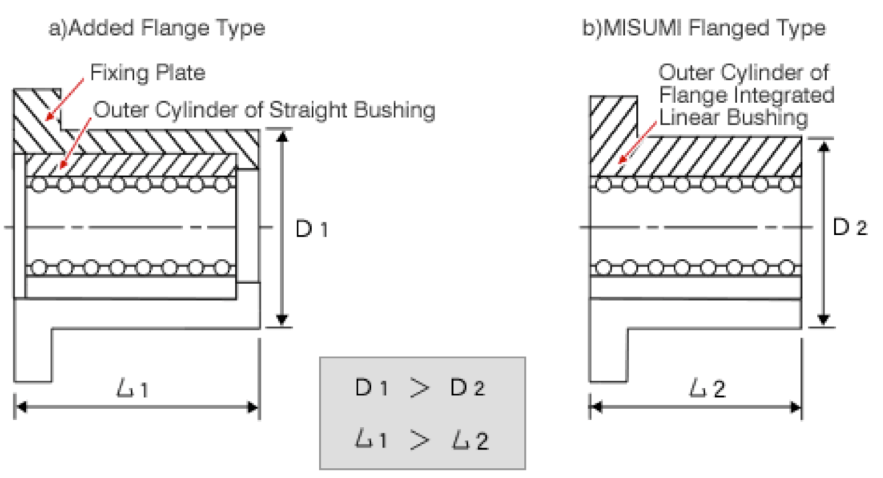 Benefits of Flanged Bushings include:

Pillow-Block Bushings– This style of bushing has a straight linear bushing inserted into a pillow-block style housing.

Benefits of Pillow-Block Bushings include:

Another important factor in choosing a bushing is the length.  The longer the bushing, the more applied load and moment load it can handle (and the more expensive it is).  This is largely due to the increased number of ball bearings that are in contact with the shaft.  Bushings lengths include:

The length of the bushings also affects clearance errors.  Specifically, given the same clearance between the shaft and the bushing, the longer bushing will have a smaller amount of angular misalignment possible then the shorter bushing.  This concept is described in the illustration below: 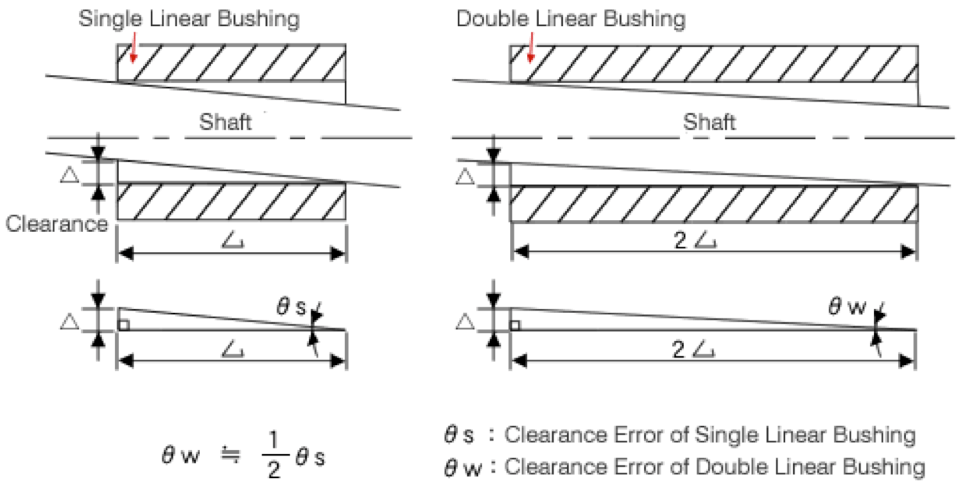 Additionally, increasing the length of the bushing reduces the effect of swells and roughness present in the shaft, as shown below:

Think of a boat traveling through fifteen-foot ocean waves.  A thirty foot fishing vessel would follow every slope and change, while a three hundred foot ocean liner would barely feel the changing seas. 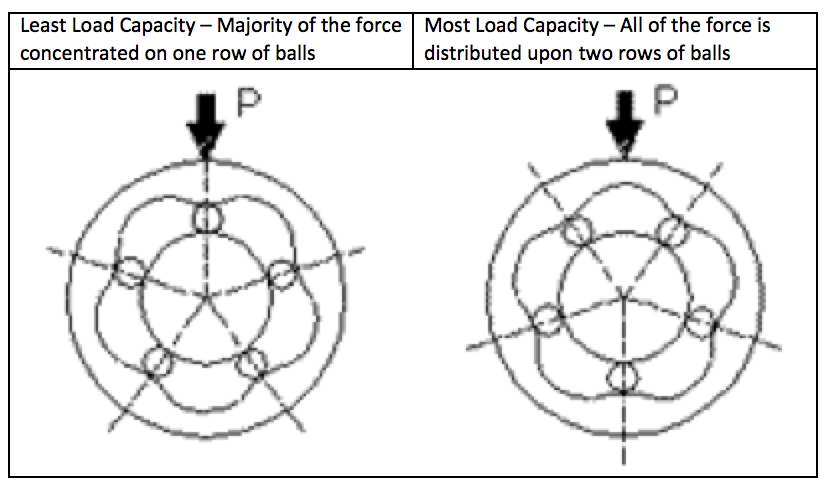 To summarize, when selecting the best linear bushing for the job, first decide the most suitable mounting style for your application (straight, flanged, or pillow-block).  Next, use load rating and accuracy requirements to determine the length of the bushings that will be used.  Finally, ensure the proper orientation of the bushing when installing.  One last thing to that was not mentioned in this article that is very important for the lifespan bushing is to ensure that they are properly lubricated.

Stay tuned for the next article in the series, which will dive into different drive mechanisms and choosing the best bearing for each one.  As always, if you have any questions, feel free to comment below or email our experts at engineering@misumiusa.com.