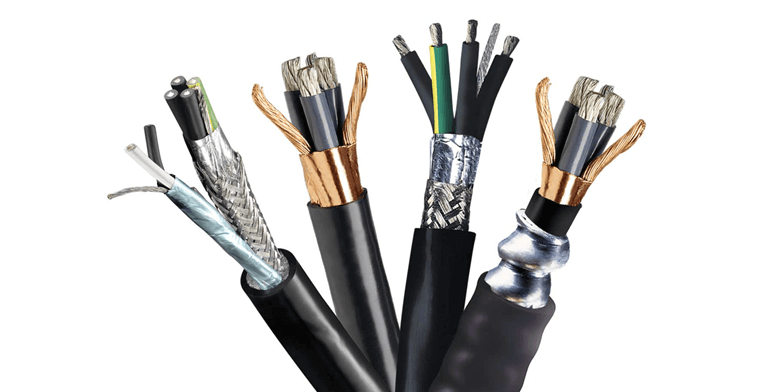 One would generally agree that any system is as strong as the summation of its parts.  The same can be said for a Variable Frequency Drive (VFD) system.  What is a VFD? One might ask.  In short, a VFD is a device that regulates the speed of an AC motor by controlling the frequency and voltage of power being delivered to the motor.  Upon the changing of its output frequency and voltage, the VFD permits the motor to adjusts its RPM to match those changes in the load.

As an example, let’s say you purchase a motor to move a conveyor.  You buy the biggest one available to avoid any operational issues.  To run said motor for all tasks (big and small) requires an energy input of about 75%.  You go purchase a VFD drive and proper cable and now to run the motor, the energy usage is now 25% for small and 50% for big tasks.  The reduction in energy consumption is quite apparent.

A VFD system is comprised of 3 key components:  the VFD itself, a cable and an electric (AC) motor.  These systems are used across industries like Automotive and Food & Beverage and in applications such as HVAC, Pumps and Electric Fans.  The widespread use of VFDs can be attributed to the various benefits provided by the system.  Some of those benefits include energy savings, via less power consumption, less wear and tear on equipment, and improved process control.  While a lot of attention is focused on the drive and motor, the cable being used is equally as important.

Like any system that has benefits, there can be some challenges as well.  There are three common challenges that are present in VFD applications:

All three of these challenges are addressed with proper rated VFD cable.

Since there are currently no standards as to what can be called VFD cable, some manufacturers are labeling cables with inappropriate attributes as VFD cables.  To wire many systems, electricians use high-heat resistant, nylon-coated wire known as THHN (Thermoplastic High Heat-Resistant Nylon-Coated), commonly called “building wire”.  In addition, 600V PVC/Nylon tray cable with a shield and UL MTW (Underwriters Laboratory Machine Tool Wire) cables are also being used for VFD applications.  While inexpensive and able to meet some VFD electrical minimums, these cables do not provide the level of protection against the challenges nor offer the longevity as high-performance manufacturer rated VFD cable.

High-performance VFD cable contains multiple critical components that separate it from building wire and some tray cables.  One of those components is its insulation.  Properly rated VFD cable comes with XLPE (Cross-linked polyethylene) insulation, which has higher stability and lower capacitance (higher corona inception voltage) than PVC/Nylon insulation.  This insulation protects against reflected waves and minimizes cable charging.  It is also rated for higher voltages and will extend the life of the cable and motor attached.  PVC is more susceptible to absorb moisture resulting in less insulation strength.  PVC is also used in basic tray cable which is not recommended to be used for VFD applications.

Other notable components in high-performance VFD cable is its shielding and grounding.  Most generic control cables and THHN wires have aluminum-only shielding, shielding from being run through conduit or no shielding at all.  Those cables may also have bare copper conductors.   Proper VFD cables have tinned copper conductors for better flexibility and vibration resistance.  They contain foil/braided shielding as opposed to just a foil shield or no shielding.  As mentioned, cable charging is reduced through the use of a cable with robust shielding and thick low-capacitance VFD grade insulation. There is also excess copper at the ground and shield system.  Effective grounding attracts current within the cable, minimizing noise leaving the cable.  This excess ground copper ensures the lowest ground impedance and current noise.

Belden is one of the top brands for industrial-grade automation cabling.  Whether you have a high-flex operation, need to ensure accurate motor control or even transmit large amounts of data in a noisy environment, Belden is built to ensure the job will get done. MISUMI now offers Belden cable.  This includes LAN, multi-core, coaxial, power and instrumentation cabling. Check out the Belden cables here.

Matt is a Senior Electrical Product Manager at MISUMI, holds a degree in Physics from Michigan State University and a Masters in Business Administration from Vanderbilt University. He has worked in manufacturing for over 15 years in various capacities but primarily automation.
Load More Related Articles
Load More By Matt Nemeth
Load More In Featured Articles

Factory Automation Causes Some Tuff Choices to be Made