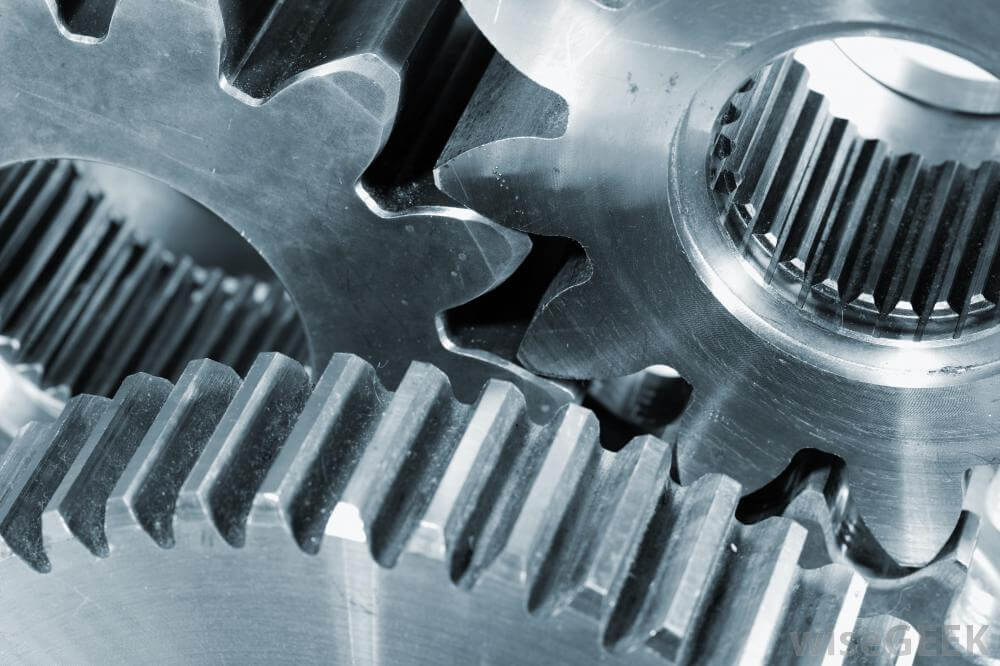 The geometry of a simple spur gear tooth is complex. Numerous dimensional parameters define the shape of the tooth profile, determine how the gears fit together, and identify locations where forces act at the gear teeth.  Two of the most important parameters, often confused with each other, are the pitch diameter (or thread pitch diameter), typically denoted as (d) and the module (or modulus) usually denoted as (m). 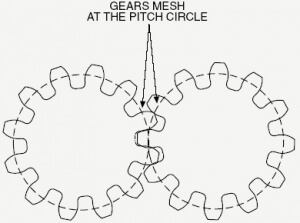 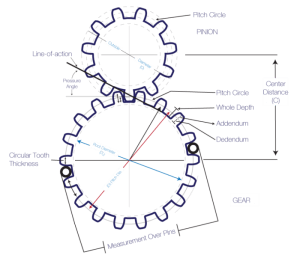 This is part of the reason why the concept of the module (m) of the gear was introduced.  Quite simply, it’s the ratio of the pitch diameter (d) to the number of teeth (N) on the gear:

The module is typically quoted in standardized gear sizing charts with implied units of length, either (mm) for SI units or (in) for BG units.  In a sense, it’s a measure of the unit size of the gear on the basis of the number of teeth present on the gear.  A useful analogy is that the module defines the “size” of each tooth as a portion of the pitch diameter “pie.”  This really means that each tooth possesses a “module” unit of the portion of the total pitch diameter.   For example, a gear that possesses a module of 10 (quoted in SI units) quite literally means that that each tooth “uses” 10 (mm) of the total pitch diameter.

In this way, the module is a very easy parameter to use to determine if two gears of differing pitch diameters will be able to mate together; two gears with different modules will not mate together because the unit size of the gear, as discussed above, must match in order for gears to mate together,

Finally, given only the gear module, a number of other geometric gear parameters can be calculated, such as diametric pitch and circular pitch.   Both gear pitch diameter and gear module are two related yet distinct parameters that are very useful to know for gear selection and sizing, as international gear standards and general design disciplines now rely heavily on the use of these parameters.

Carlicia is a Product Marketing Engineer at MISUMI, holds a degree in Mechanical Engineering from the University of Illinois at Chicago and is currently en route to completing her Master's Degree in Energy Engineering - May 2020. She is a Certified SOLIDWORKS Associate, Marketo Certified Expert, and is passionate about education and training.
Load More Related Articles
Load More By Carlicia Layosa
Load More In Tips & Tricks

One would generally agree that any system is ...